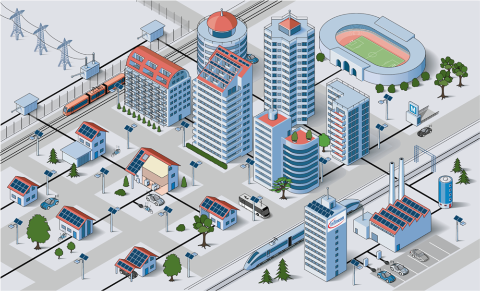 Are Smart Cities (and by that we always mean MESH Cities) too expensive for bottom-up development? The OVUM research group issued a smart cities report this month with good and bad news.  The good news is that while the buzz around intelligent, responsive cities continues to fascinate the media, the bad news is that major IT players are wondering who is going to pay for digitally-enhanced cities.

OVUM estimates that smart city IT services alone are worth some $35 billion. Problem is, those big IT companies cannot underwrite the long lead times required to get a worthwhile return on investment from providing SC services. IT companies work on a five quarter return cycle. Cities, on the other hand, get their infrastructure paybacks over generational timeframes. Hence the disconnect.

Think of it this way: For the past thirty years or so the IT sector has taken existing processes in various public and private organizations and made them more efficient through automation. As far as disruptive change is concerned, this was an easy sell for industrial IT companies. But what happens when there is a market need that requires creation of new, innovative information-management solutions rather than incremental improvements to existing processes? Who pays for that reinvention on a civic scale?

Ovum analyst Joe Dignan says, “The model has changed. Previously, you had IT companies leading the charge (of disruptive change). Now you have construction companies, developers, utilities, even the banks,” he said. “When you try to engage with a city, where do you start? Do you start with local government, health, transport?”

The real issue–if we follow Dignan’s logic–is that cities require the leadership and management capability to raise public funds and apply them to the new but as yet unproven systems. In the Western world, where government has been marginalized and its workers discouraged, who makes those decisions?

It is no surprise that civic leaders in emerging economies have made the greatest strides in the smart cities movement. Places like Songdo, Korea have embraced partnerships with, for example, Cisco to create new ways of empowering the civic infrastructure of modern cities.

We are faced with a great challenge. How do we reinvent the first-world city? How do we manage the same kind of disruptive changes that have overturned our industrial economy? As OVUM notes, the solutions are available. The big question is who will pay for them.