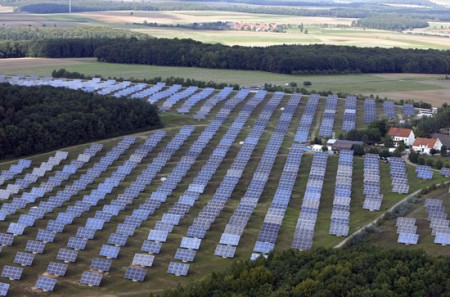 Even if you wholeheartedly believe in burning fossil fuels for energy, it is not hard to admire those cities that save oil for important things like advanced materials technologies, pharmaceuticals, etc. After all, fossil fuels are a finite resource. Aren’t they?

That’s why it was eye-opening to read that a few weeks ago Germany obtained more than 50% of the energy the country consumed from solar panels. This feat was managed by a Northern European industrial economy. If that doesn’t suggest a paradigm shift is in the making on the energy front, what does? Live Trading News writes:

Norbert Allnoch, director of the Institute of the Renewable Energy Industry in Muenster, said the 22 gigawatts of solar power per hour fed into the national grid Saturday met about 50% of the nation’s mid-day electricity needs.

“Never before anywhere has a country produced as much photo-voltaic electricity,” Mr. Allnoch said. “Germany came close to the 20 gigawatt mark a few times in recent weeks. But this was the 1st time we made it over.”

Fukushima changed Germany’s approach to energy use. Nuclear was out. They’d already committed to renewables. But they’ve cut back on their Feed-In-Tarrif campaign recently. In spite of that decision, this month’s record illustrates that cities can be powered by the sun. And every few months the efficiency of solar panels improves that much more.

What everyone is waiting for is a storage technology that will improve the merit order effect of solar energy. This would bring costs down to a level near that of traditional fossil fuels. There are a number of storage  technologies in development from inertia-based systems to super-heated plasma. A breakthrough is not far off.

A truly MESH City might forget about waiting for national governments to lead the way to clean energy. They’d just decide to do it themselves. How?

Well, this approach might work. Most cities have roughly a 70% stock of buildings that will still be in use in fifty years. Of that stock maybe 20% are energy efficient to some kind of modern standard. We know from extensive commercial practice that making those buildings energy efficient has an energy-saving payback of 7 to 10 years with an ROI of 10 to 15%. Not a bad investment.

Add solar capabilities to those building retrofits on a massive urban scale (along with green roofs, etc.), tie those panels to an energy storage grid, and soon you’ll have both a clean and handsomely profitable municipality.

Does Germany’s recent accomplishment suggest Berlin will win the race to true MESH City status? For the sake of people everywhere we hope some city does–sooner rather than later.