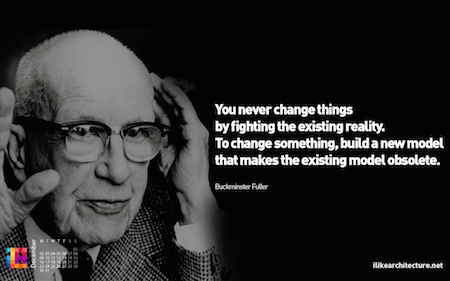 How to change things: Buckminster Fuller (image from ilikearchitecture.net)

(Given the controversy generated by Google Sidewalk’s Waterfront Toronto project, we’re republishing this post as a reminder of the turbulence disruptive change causes)

The new Chief Digital Officer position some cities are adding to their management teams is not well understood, but that doesn’t mean city leaders should ignore it. Far from it. If your city isn’t empowering a person in that position now or in the near future then it is already behind the adoption curve. Why?

The livable—not to mention the efficient, globally competitive—cities of tomorrow are enabled by complex information systems. And that’s a good thing. By design they are able to both foster and manage the inevitable, old economy disruptions being thrust upon them by the likes of Google, Uber, Airbnb, ZipCar, PowerWall, etc., etc., etc. But until today’s city managers are up to speed on digital empowerment, they need CDOs to guide them through the massive disruptions ahead.

Some cities understand the inevitable. They are embracing the future. Most aren’t. That’s a shocking dereliction of management because what is about to happen to cities is already happening across numerous public-facing industries. Look at the taxi service for one example. For decades taxis were the only game in town because they had a centralised distribution network kept busy by a politicised lockup on licensing permits. Enter Uber and Lyft. Goodbye inefficient, analog cab systems.

Now, when most people under forty or so want a ride somewhere they don’t hail a taxi, they pull out their smart phones. It just works—to use Apple’s old slogan. People want the better service of Uber-like offerings. City licensing departments get bypassed because few politicians will vote to support an industry most people dislike. It’s the classic market disruption of building a better mousetrap . . .

Uber as a transit service is not the only change new information technologies bring. What happens to cities when administrative and operational functions are “Uberised?” By that term we mean many city administration functions that took teams of people to manage will be virtualised. Overhead costs will plummet. Services will be delivered more quickly. Taxes that once went to support an army of administrators can be redirected towards better transit, housing, health care, education or an array of other important city functions.

That future scenario looks good to the average North American city dweller who wonders what benefits they get from their tax dollars as their existing city functions keep falling behind. In spite of the dissatifaction with the status quo, many of the entrenched incumbents in our city management systems are doing their best to slow or stop the transition. We’ve written about it here with David Miller’s experience as Mayor of Toronto and here with the C40 Organisation.

Overcoming resistance is the hard part of system change. The CDOs of this world along with the policy makers and tech companies who support them face decades of turbulence unrivalled even by the social upheavals caused when the automobile became part of our urban reality. And what about those former Third World countries who have just embraced the North American, car-based urban model only to find out that the future is about demotorisation? Now they have to disrupt their internal sytems again. It will happen, but slowly.

To surf the turbulent waters of all these changes a CDO must be part CIO, CMO, CFO, Innovation Officer, Designer, Planner, Economic Development Officer, and politician. Who out there has such a diverse skill set? Who, as Buckminster Fuller so accurately predicted, is enough of an educated generalist to master the many required knowledge silos that must come together to design the cities of tomorrow? The answer is not many. It is no surprise though. After all, what school is preparing its students to disrupt their own entitlement? Are there any? Most college and university students are investing in future employment for jobs that are becoming or will become obsolete through technology-driven change.

All this upheaval was in the cards. The economic strategists who hammered in freer global trade in the nineteen-eighties knew it. They didn’t have to be a Schumpeter to predict what would happen when vastly more people got invited into the future-pushing, science-meets-technology-meets-business game. For the rest of us though, all this change can be debilitating. That’s why many North Americans have stopped dreaming of the future because they’re too preoccupied with the phantoms of their former economic past.

While it is a broad generalisation, MESH Cities often reminds its readers that in today’s world it is the once marginalised cities who aspire most to future greatness. Importantly, they not only aspire to it, they are also making it happen. They are changing the global urban game and if Western cities want to play and win the CDO role is crucial.

Given all this upheaval, the biggest problem our new CDOs face is deciding how to best build their digitally empowered cities. Today’s technology landscape is littered with companies offering city-enhancing products. But which ones will be the Apples or Microsofts of the urban future? What organisation can guarantee the CDO that the money spent on digital infrastructure won’t be wasted as new, better solutions enter the marketplace?

It is a dilemma. Do you remember how personal computers disrupted the mainframe computing sector? How about when smartphone, crown prince RIM/BlackBerry got deposed by the upstarts iPhone and Android? No city manager wants to throw their resources away on solutions that aren’t viable in the long term. But cities find themselves in part of the technological disruption curve that John Hagel, Head of Deloitte’s Center for the Edge, describes as the place where “shaping strategies” are made. In other words, when major players in a changing market want to ensure their solutions are integral to the future, they embrace strategies to shape that market in their favour.

Who is driving those city shaping strategies today? For a decade or so IBM and Cisco offered up their Rio, Brazil and Songdo, Korea projects. Those companies are powerful incumbents, but just like RIM they might lose if someone else is doing it better. MESH Cities’ prediction is that the winners in this shaping race will be those places willing to take the risks. Right now that means cities in Asia and maybe even in parts of Africa.

Let’s look at India for example. That country’s policy is dedicated to building 100 Smart Cities over the next generation. Rather than looking far afield for the right smart city platforms to run these cities, they are building them at home, organically. California’s tech sector has long known that India’s software engineers are among the best anywhere, so it should be no surprise researchers at that country’s top engineering universities are working to design the open platforms that will power all these new cities. 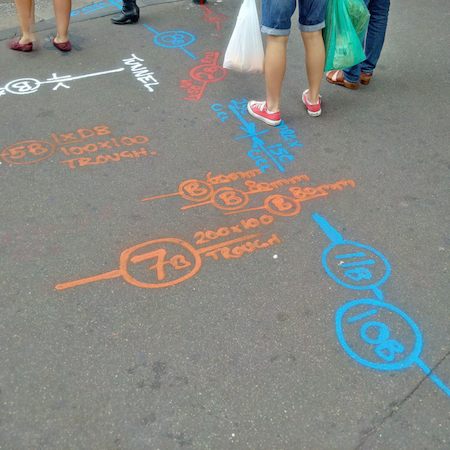 All of this isn’t news to those who follow IEEE publications on System Sciences. India’s academics produce papers like “Understanding Smart Cities: An Integrative Framework,” or ” An Interoperable Realization of Smart Cities with Plug and Play based Device Management.” With research leadership spurring on real city test platforms, can Smart Cities become to Asia in the 21st Century what North America’s great logistics networks like railroads and highways were in the 20th Century? Given Asia’s risk taking—hand-in-hand with investment in whole, functioning cities, rather than just a few neighbourhoods—they may be shaping the SC platforms other cities will have to adopt or be left behind.

But there is more going on in cities than just simple digital empowerment by the Internet of Things.

Economic and industrial strategists are also looking to the future of smarter cities because they see in them a panacea for many of the world’s economic, environmental, and social ills. Guaranteed for life jobs, as our parents knew them, are mostly gone because the once noble task of unfettered nation building is over. With that buildout behind us, new economic frameworks are being created weaving together renewable energy and holistic health care and livable cities and, well, more than enough activity to replace rust-belt industries. In fact, Steady State Economies are increasingly part of the city planner lexicon. Better rather than bigger is their siren call.

Out of all this social and economic disruption comes the need for the City Chief Digital Officer as new frontier guide for city leaders. In North American and other Western economies political timidness keeps deferring the inevitable changes required. “We can’t kick the can down the road because we’ve run out of road,” says Chicago’s Rahm Emanuel. The CDO’s job, then, is to build new, metaphorical roads of a type and quality that will support the economies of tomorrow while making cities the home to our collective dreams they have always aspired to be.

All of the preceding is a lot for one person in one role to tackle. And the truth of the CDO is that the right person will intend from the start to make their jobs obsolete as soon as possible. That means, of course, the sooner the disruptive changes the CDO can assimilate into the normative function of the modern city the better off that city will be. Their job is to make themselves obsolete, that is, if they really believe in the obsolescence-inducing changes they will have to bring to the city as institution.

How, then, should a city select someone for the CDO role? What skills should that person possess? Good questions.

Here’s what we think are the key requirements for a person in the role. They have to understand the language of cities—that is, the architecture, design, and planning thinking that when well done collectively makes cities great over time. They have to understand transit systems—how they work and how they are built. They have to be conversant with disruptive innovation in the software sector and especially in the mobile platform/Internet of Things technology fields. They must be designers, innovators, and enablers. That is, they have to know the potential of and, yes, even the fear generated by looking at a blank page and thinking, “Ok, what can I create that satisfies the opportunities and problems here?” They need to know the drivers of economic development. They also have to know how to communicate using both old and new media.

Despite the title, digital fluency forms only part of the role of future Chief Digital Officers. It is unlikely that a person coming solely from the digital media sector can navigate the complexity demanded by the competition around smart cities, although that’s the choice some cities have made. In a way the CDO is the new McKinsey Consulting team for cities wrapped up in one person. Of course, it is impossible to satisfy all the job’s possible demands, but someone with broad experience and education who also knows how to bring people together to generate solutions will likely manage the position.

MESH Cities as an organisation is here to help cities everywhere prepare for their complex future—whatever opportunities that future may bring.  Discussions like this one are our contribution to the transition. What is your city doing to manage change in this remarkable time? Let us know.