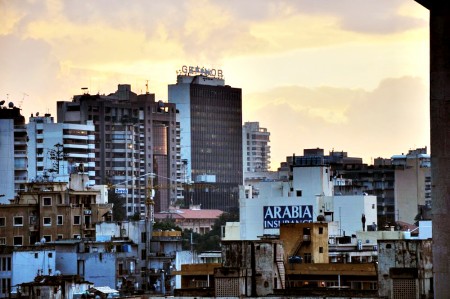 Like many in the Americas my understanding of Beirut came from news headlines that often shocked with the horrors of war. The last forty years have not been kind to the city. There were internecine wars, border clashes, and aerial bombings. The president was assassinated in a macabre bombing that destroyed a block of waterfront boulevard killing dozens.

But not unscathed. Far from it. Here is a photo I took of a building on the infamous “Green Line” during a 2009 visit. When the city was split between Christian and Muslim fighters this city road, a no man’s land, became a paradoxical green oasis in an otherwise denuded city. 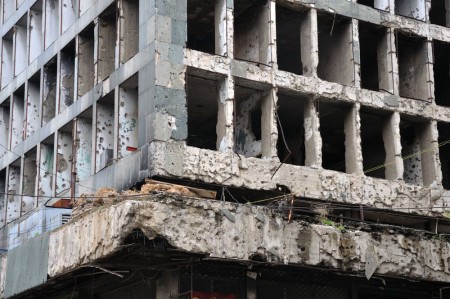 Beirut is an urban centre without city planning as North American cities understand it. Traffic is chaotic. Even in peace green spaces remain rare if not functionally non-existent. The city’s air is thick with dust and exhaust fumes. I saw one cyclist there in 2009. Over one week.

Beirut is a city on the edge of sustainability. That may be its salvation as well as its curse. The people here want more. And the city is changing. New construction is everywhere. One architect is offering a smart city plan that may just accelerate that change. Wassim Melki has a vision.

“We want to cover the top of nearly every building in the city with trees,” said Melki. 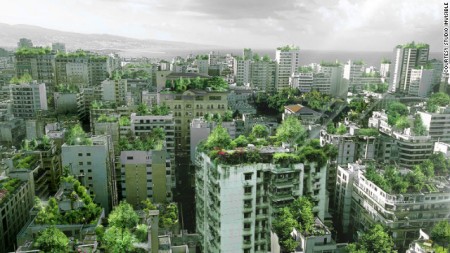 “We’re just talking about planting small to medium-sized trees in relatively large pots and securing them to the roofs,” he added.

At first look this plan does not fall into the normal categories of “smart cities.” The solution is not wired. The cost is modest. The engineering simple. The impact of the idea is, however, very smart. That’s why it is included in MESH Cities. We have noticed that cities that have faced ecological crisis and survived can teach other cities a lot. That’s where information technologies come in. They help codify and distribute that information.

Melki’s scheme would help remediate the environmental challenges by cleaning air and reducing the urban heat island effect. But the idea is more than functional, it is poetic as well.

“Aside from the major environmental and social benefits, it would also be incredibly iconic,” he says. “Just imagine: The world’s first rooftop garden city.”