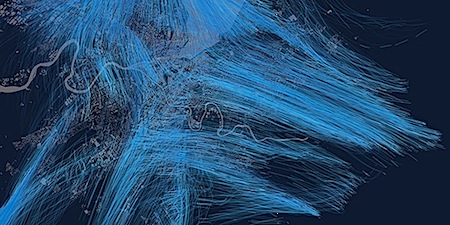 Ville Vivante traces the movement of mobile phones in the city of Geneva, Switzerland.

“The Human Connectome Project aims to provide an unparalleled compilation of neural data, an interface to graphically navigate this data and the opportunity to achieve never before realized conclusions about the living human brain.”

Cities are the most complex, artificial machines ever conceived of and built. What is remarkable about that truth is that cities are not “designed” in their entirety, but often evolve over time to embody functions and representations their founders could never have imagined. In this way they share many characteristics of organic systems produced by evolutionary processes.

The two images above give a hint of the metaphorical relationships we as urban strategists might make between cities and brains. Like early brain researcher Alexander Luria, people who speculated about the connection between cities and evolutionary emergence had to look to analogs to substantiate their research.

For example, when Luria began his studies of the human brain no one knew what parts of the brain managed what parts of the body. Famously, he had to look at soldiers with brain injuries to gain insights into brain function mapping. Of course, today magnetic resonance scanners from Siemens allow researchers to see in real time what is going on within the brain when we move a body part or imagine an object. Brain function mapping is now an exact science (For more on the topic follow the link above to the Human Connectome Project).

These new technologies have given researchers game-changing information about the brain as an emergent system. And we can draw parallels between that evolutionary organism and the 21st C. city.

The newly discovered mathematical relationships between cities and the human brain will change how we understand the city.

Comparison of City Highway System and Neocortex Exponents for Quantities as a Function of Surface Area, Changizi and Destefano

In an article titled: Mathematics, Cities, and Brains: What Can a Highway Engineer Learn From  a Neuroscientist? Jason Goldman explains the relationships.

There’s the obvious analogy: neurons are like highways. Neurons are channels that carry information in the form of electric signals from one location within the brain to another, while highways are channels that transport people and materials from one location within a city to another. Cognitive scientists Mark Changizi and Marc Destefano think that the analogy goes deeper, though: “from the perspective of the city as a whole, the materials and people that highways transport are crucial to the large-scale function carried out by the city, and are, in a sense, signals – that one signal is electric and the other physical may not matter in regards to the fundamental properties governing them.”

In other words, the researchers looked at brain data, compared that data to statistics from a number of cities, and found that in analogous, highway-like functions there are indisputable similarities between the two. Uniting both systems are mathematical constants we can conclude are driven by some universal physical law. The next step in this research may well be the analysis of cellular traffic flows in MESH Cities. What will that work reveal about the global brain (or, in 20th C terms, the Noosphere).

As 21st C. urban strategists–rather than urban planners–what do we do with this macro-neurourban lifting of the universe’s curtain? Goldman thinks that highway engineers can learn something about the design of transit systems. We should be able to as well.