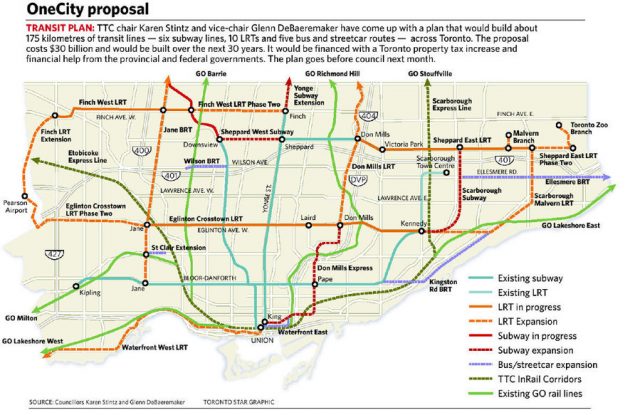 Will Toronto’s senior bureaucrats and politicians break the cycle of underfunding public realm improvements? Their proposed $30 billion, 30 year plan to build the city’s transit infrastructure reintroduces the idea of long-term public vision to the political discourse. Will other North American cities follow its lead? We can only hope so as the alternative is to continue to hand over social and economic leadership to other parts of the world.

Why should we throw our collective weight behind big ideas like Toronto’s?

Political commentator Edward Luce notes in his new book that the US has lost its way and is paying the economic price for that waywardness. Like diet pop drinkers, the American public wants the rush of pleasure services (or sweetness) brings, but they don’t want to pay the price for it. Luce maintains:

Since quality of governance is an important part of the competitiveness of any economy, our gauges should be flashing red. Conventional wisdom assumes that America’s innovative vitality is independent of the health of its political economy. No matter how gridlocked the politics, the golden goose will keep laying eggs. It is a view that relies on a selective reading of what it was that powered America’s rise to predominance—and what sustained it. Smart and pragmatic economic policy-making played an instrumental role in creating Hamilton’s “American system” that spurred the young Republic’s economy, as indeed it did after the Civil War, after the Great Depression and throughout the Cold War, including under Reagan (the creation of Sematech, and the beating back of Japan’s mercantilist assault on the US semi-conductor industry was America’s last conscious foray into industrial policy).

In other words, and to condense Luce’s general argument, the public purse and government leadership is essential for our economic well being. Without that combination big ideas cannot flourish. We need private companies, to be sure. But we also need people, organizations, and institutions who think beyond quarterly reports. That is what Toronto’s new plan does.

In an age where the cost to borrow is at historic lows, investing in public infrastructure makes sense. And if that infrastructure is also “smart” then the societal benefits may surprise us. Fingers crossed that this initiative is the catalyst for other projects in Canada and the US.

How Big City Transit Can Benefit From Popup Services