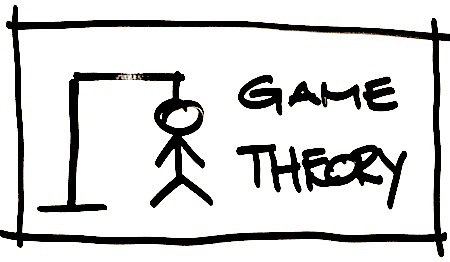 We’re big game theory fans here at MESH Cities. In fact, we think one of the big questions of modern geo-business is which theoretical stream to follow, Sun Tzu’s  “The Art of War” or John von Neumann’s “Theory of Games and Economic Behaviour.” The conflict even has one of us wandering around mumbling “Try and take the pebbles from my hand, Grasshopper,”  a symptom we think was caused by a bad lunch and too much television.

In any case, put it this way: if you’re a quant you go with hard math, if you’re not, well, the lessons of poetry mixed with war seem better suited to a nondeterministic world.

What’s this got to do with Smart Cities (or, as we better describe them, MESH Cities)?

It is generally agreed that in a symmetrical environment where all the players in a game have similar opportunities to win, equilibrium tends to be the best strategy to get ahead. In other words, you scratch my back and I’ll scratch yours. In an asymmetrical world the underdog can rarely win the game unless they manage to change the rules. Some places call this entrepreneurship.

Enter MESH Cities. Intelligent city systems are by their very nature disruptive of established infrastructure. The entrenched players in the civic infrastructure game really don’t want to change. They tend to be happy with a very predictable ROI based on serving the daily needs of the city-dwelling public. City administrators have little choice but to get locked into the long term amortization of massive energy and water utilities which, of course, tend to want to keep winning the game by keeping other players out.

MESH Cities, on the other hand, are free from many of the legacy systems resisting change. That’s why we are seeing regions of the globe not known for robust energy grids or communications systems suddenly realizing that not only are they in the game for the first time ever, but they may even be holding some of the high cards. These places can move quickly.

So, if a Cisco or Siemens or IBM or, well, you get the idea, has a new, smart way of doing more with less, then these places will jump on board for the simple reason that they can. In a way this is analogous to the world’s airline sector. Players that were so small they were laughed at a few years ago now lead that particular game. Call it disruptive market change. Or call it asymmetrical game tactics.

Now, because we live in North America we look around and wonder if maybe it is time to shake things up around here in terms of our aging infrastructure before we find ourselves in the same shoes as Pan-American Airlines or Braniff. Bankrupt. Obsolete. Forgotten. We need new, efficient grids and responsive systems to allow us to better compete on the global stage.

Let’s get back in the game and give our cities a chance to show that they have what it takes to win—globally.