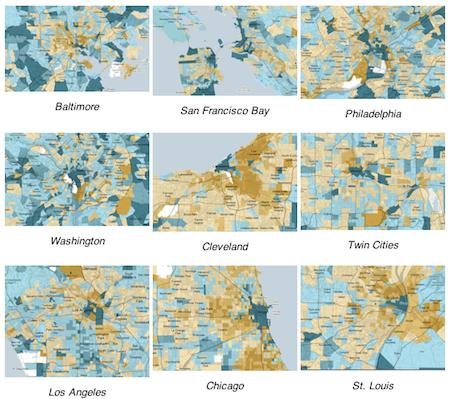 People are moving back to American downtowns according to a New York Times report.

Economic policymakers are known to roll their eyes when they hear people talk about smart cities being the answer to a sustainable future. Where’s the money in that they ask? Doesn’t the public know that dumb, inefficient cities are job creation engines?

Too bad for us. If that approach to economic development sounds familiar to North Americans it should. Remember the CEOs of those big car companies in the 70s and 80s. Sure you do. They’re the ones who bet the farm that no one would buy small, fuel efficient cars (let alone those well-designed European sedans).

According to Detroit, cheap, oil-fueled suburbs were going to be with us forever. Forget that the buying public wanted reliable gas-sippers, big, inefficient cars were good for the economy. Good thing for the “Big Three” that the public purse was there to bail out their shortsighted decisions.

The market is speaking, and everyone should listen. It turns out that people—even in Cleveland—are moving downtown as gas tops $4 a gallon. Fewer young Americans are choosing cars these days. Why should they when city centres offer everything people need to live prosperous, enjoyable lives. And MESH Cities make the resulting higher urban densities more cost-effective to maintain, not to mention more enjoyable to live in.

We’re not calling some short sighted policy-makers the modern day Edsel designers, even though they are flirting with the same kind of economic disaster Detroit is going through. The truth is that disruptive market change is hard to manage and even harder to predict. That’s why in the business world old, established companies can sometimes die while wet behind the ears upstarts eat their lunch. The dinosaurs couldn’t or wouldn’t see that their world was changing.

So when governments don’t want to hear that their country’s economic base is collapsing because of . . .

or a myriad of other “inconvenient truths,” it means we are in for a rough economic ride as competitors take up our slack. Ask the tailors of Paris who rioted over the invention of mechanical sewing machines. Change happens. What is surprising is that the same policymakers who agreed globalization was good economically are now failing to embrace the economic opportunity of their decisions. We want a value add economy that makes our lives richer not poorer, right? So why not invest in urban change?

But are MESH Cities really an economic panacea for North American markets? In a word, yes. The economic future, if we want to embrace it, is moving towards dematerialization. Let us explain. Information technologies, material science, engineering, and other advanced knowledge systems together allow us to do more with less. As a result of that synergy, every day hundred of new products and services get created that did not exist ten years ago. We don’t have to use human muscle power to move stuff around anymore. We amplify what an individual person is able to accomplish through the use of new tools.

A good example of the economic benefits to society of this change is in making buildings more energy efficient.

According to the Rockefeller Foundation and McKinsey energy efficient buildings are an investment bonanza:

The remarkable thing about these statistics is that there is any hesitation at all about making it happen—yesterday.  But energy efficient buildings are just one small part of the smart city solution set. Intelligence-driven urban amenities of all sorts will drive new products and services that collectively will make that $trillion look insignificant.

Where do we go from here? Will our governments let go of the past and move towards an intelligence-fueled future where we do more with less? We don’t know, but while we wait let’s be the change we want to see.