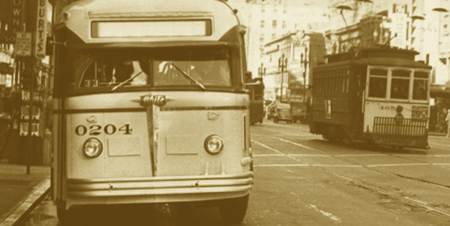 Private bus services will get more people out of cars by offering something different than mass transit.

For all those city transit workers out their wringing their hands over popup, private transit systems like Bridj, I want to remind you that in the sixties and seventies you folks tried to do something similar. You wanted to get those suburbanites out of their cars knowing that they wouldn’t settle for low frequency, uncomfortable mass transit. Back then it wasn’t called popup transit, it was called “dial-a-ride” or something similar.

Not surprisingly, your services failed. Let’s not point fingers (maybe you were too successful?). The truth is that the big players like auto manufacturers and developers wanted people in private cars. The more the better. Our economy depended on it. City planners made careers out of it. And you really can’t expect mass transit systems to be able to change their modus operandi to successfully cater to fringe users. It is not in their organizational DNA. Forget about the TTC, CTA, or BART offering coffee, plush seats, and WiFi to an elite few. It just isn’t going to happen (and if for some miracle they could make it work how long would it take for transit users crammed into subways to say, “what about me?”).

That’s why Bridj’s time has come. The stars have aligned to make their private sector service viable. The first gravitational shift in this new cosmos is that people no longer think car ownership is a right-of-passage. Congested roads along with neighbourhood car rental services like Zipcar make the idea of convenient but expensive cars a lot less appealing. Then there is popup services’ digital disruption death star. With mobile devices delivering Internet-based software solutions to people on the streets in real time, new ways of using the city are evolving. Think of Uber and Airbnb as just two examples.

Combine those growing trends with ubiquitous access to big data and you get city-changing, disruptive technologies of moon-landing proportions. Suburbanites, now you can use your garage for important things like storing tools, lawnmowers, and furniture. Speaking of market disruption, is it time for investors to sell those mini-storage company shares? 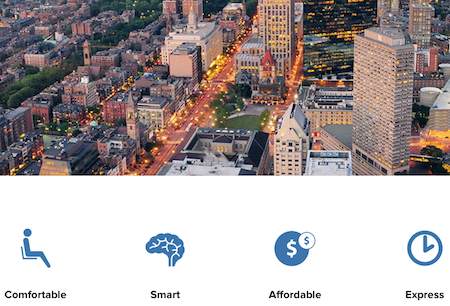 Bridj’s founder is a twenty something entrepreneur named Matthew George. Mr. George started into this sector by first offering transit services to college students who needed to get home for holidays. George realized that a huge percentage of those students could be carried to within twenty miles or so of their homes on just a few contracted busses. With that success behind him Bridj is an inevitable step for a young, digital aware disrupter with connections. He worked at the White House one year.

Bridj services are structured around a simple idea: some people want and can afford comfortable, efficient transit. For just a few dollars more than public transit services—still less than taking a cab—Bridj users can get to their offices or schools in style. Your complimentary coffee and WiFi connection awaits. Bridj can do this efficiently and make more because they use big data source to figure out where the demand is. Then they contract our the motive power to companies who know that specialty. Remember, meshed systems aren’t about hardware as much as they are about algorithms. Leave that atom-based stuff to someone else.

That brings us back to city-run transit. Organizations like Toronto’s TTC do commendable work on shoestring budgets. The TTC operates the most efficient fare recovery system in North America. But we can’t expect them to compete with the Bridjs of the world. In fact, we don’t want them to. What we do want is for the big transit systems to learn something from their upstart, smaller cousins.   For example, how can they use digital technology to make their big systems as responsive as small ones? How can they outsource capital cost investments to private sector providers who can better keep up with evolving technologies?

From a city management perspective, the big idea here is to get people out of cars, off highways, and into transit—of all types. If Bridj can attract users who otherwise would drive or take a taxi, what’s wrong with that? We will all benefit. Big transit will be able to focus on what it does best, moving a lot of people, not a few. It might also benefit from the coopetition of meshed-driven alternatives. Let the future of transit begin.