Rugby is a sport for the determined. Eighty minutes of continuous battering, the game is punctuated by neck-wrenching collisions between opponents. Rugby fans scoff at its weak sister, American football, with its dilettante, over-armoured teams playing their five-second action sequences between commercials.

Rugby, on the other hand, is a straight-up game preferred by people with true grit. And they play to win.

You’ll find former Toronto mayor David Miller among them. The past captain of the U.S. National championship Harvard Rugby team, David is a determined guy. He wants cities to be better and offers a futurist’s vision of how 21st century cities can be livable, sustainable, and globally competitive. In fact, his civic idealism is so compelling that urbanist Jane Jacobs championed him when he first ran for mayor of Toronto.

But David’s toughness and intelligence were not enough to overcome the resistance to change he encountered trying to make Toronto a greener, carbon neutral city. Look, for example, at his Transit City plan. If built it would have secured Toronto’s place as a world leading, green transit city. But voters turned away from Miller’s transit vision after he left office. Instead, they elected as his successor a mayor who thought a transit friendly, sustainable city was just another name for a “war on cars.”

Under the reactionary leadership of Rob Ford, Toronto became an example of what I’ll call the growing “lost generation” of cities and states. These are places where the inevitable shift to responsible environmental stewardship is thwarted—even punished—by entrenched economic interests working hand-in-iron fist with those who resist disruptive-of-the-old-order change. In Toronto’s case the voters' choice meant a loss of hundreds of millions of dollars in opportunity costs. It also delayed by ten years—maybe longer—much needed improvements to the city’s transit infrastructure.

Climate change fights like Miller’s now span across generational timeframes. When change advocates lose their battles they lose big—but so does the sustainable world they are trying to serve.

When I spoke to David about why cities resist obviously needed change he was philosophical. “City bureaucracies,” he suggested, “are slow moving, but they are designed that way on purpose . . . It is a rational thing.” What does he mean? We know that sometimes big changes can be too fast or in the wrong direction. A certain amount of inertia can save cities from following ideas that may turn out to just be fads. But that’s not always true.

The Transit City loss has got to anger the rugby player in Miller. In spite of putting all his strength of arm and mind into the overwhelmingly justifiable fight to make Toronto more sustainable, not to mention easier to get around in, his team lost the match. But the bigger global struggle continues. And there are some good lessons we can learn from his efforts.

Key among those lessons is that entrenched systems—no matter how obsolete they may be—will fight to resist losing their power.

Donella Meadows influenced Systems theorist Jack Harich explains why change doesn’t happen even when it is clear to most that change is essential. His paper “Change resistance as the crux of the environmental sustainability problem,” concludes that the environmental movement is in the middle of what scientists call a Kuhnian paradigm shift. That shift is described this way: New, unorthodox propositions like Einstein’s E=MC2 will be resisted by the established scientific community, that is, until those propositions become the new orthodoxy. In other words, change is hard and it takes time.

Society is aware of the proper practices required to live sustainably and the need to do so. But society has a strong aversion to adopting these practices. As a result, problem solvers have created thousands of effective (and often ingenious) proper practices. But they are stymied in their attempts to have them taken up by enough of the system to solve the problem because an “implicit system goal” is causing insurmountable change resistance. Therefore systemic change resistance is the crux of the problem and must be solved first.

How do we overcome the seemingly insurmountable system-driven barriers to change that hamstring our cities? How do we solve the critical problem of change resistance before being allowed to clean up the world?

Here is one possible approach.

So-called Smart Cities have taken up the fight against climate change where Sustainable Cities have faltered. While the end games of both are similar, technological-driven, efficiency seeking smarter cities offer attractive opportunities rather than just challenges to entrenched urban economy players. And that is their biggest asset: smart cities are the you scratch my back and I'll scratch yours solution of system change.

For example, one important scrum David Miller did win during his tenure as mayor was introducing the city to the Open Data movement, a subset of the smarter city framework. I’ve written at length about how the mayor’s office and the transit commissioner at the time, Adam Giambrone, worked with us to embrace the innovative power of a bottom up, digital initiative called the TTC Challenge. In accepting the challenge, Miller and his team were open minded and/or brave enough to let his office as well as Toronto Transit staff risk the possibility of a very public failure. They were willing to work with young digital entrepreneurs who aspired to make the TTC an even better way. The chance they took resulted in community benefits that exceeded all expectations.

At the time of Transit Camp Miller was Chair of the Clinton Foundation supported C40 initiative. With its mission to “. . . drive meaningful, measurable and sustainable action on climate change,” the C40 is a global force for solving the problems of an increasingly urban world. Making cities smarter is a key part of its platform, so Miller had insights into the then nascent growth of digitally connected cities that made his decision for digital openness easier.

After the TTC Camp’s success digital innovation was in the air. Toronto was one of the first North American cities to make key operational data available to mobile device developers. But willpower and vision alone can’t sustain a big, standards-based initiative like an open city movement. With Miller’s departure it was New York’s powerhouse mayor Michael Bloomberg who took up the challenge of making open cities work on a continuous basis. With huge digital resources as well as political capital behind him, he did. 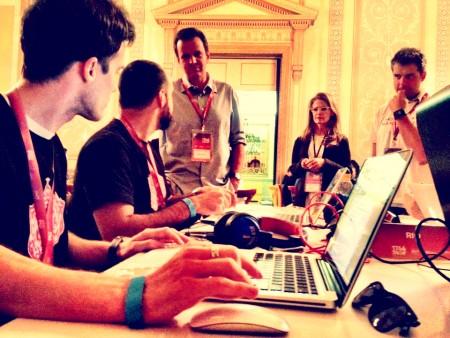 The latest C40 Chair is Rio de Janeiro Mayor Eduardo Paes. Paes is fully invested in capturing the operational benefits smart cities offer given his city’s 2016 Olympic Games are less than a year away. To make RIo more responsive and livable in time for the the Olympics, the city administration engaged I.T. powerhouse IBM with its Smarter City solution framework.

What we are witnessing is the birth of something I call Polisdigitocracy. This is a form of government that counts participation and transparency as its cornerstones and uses technology as its guide. The digital revolution is allowing democracy to recall its foundations and evolution is modernizing and reinforcing our fundamental values. And we are only at the beginning of that journey.

Whether called Polisdigitocracy or smarter cities, or indeed MESH Cities, Paes is right: the urban digital revolution can overcome barriers of systemic resistance, empowering citizens to foster new forms of civic representation. Cities won’t be the same. They’ll be better.

Tomorrow Part 2: What the C40 is learning about smart cities and change resistance