According to C40.org cities are the new changemakers. This is how it happened.

David Miller Chaired the C40 from 2008 to 2010 leading the Copenhagen Climate Summit for Mayors as well as the C40 Mayors Summit in Seoul. While in that role Miller urged the development of climate change fighting solutions all cities could use. Under recent Chairs Bloomberg and Paes that development continues.

Miller knew from his Toronto experience that the world’s big cities share similar problems despite differences in culture, geography, or resources. Given that truth, cities everywhere are able to develop and share the tools needed to solve those problems—no matter what their rank on the city livability scale.

Whether they are rich or poor, all C40 cities are on the front line of what Michael Bloomberg calls the greatest challenge of our time—climate change. To cope with that change, cities are innovating new tools to tackle the most urgent climate threats. And because cities are at climate change ground zero, they must move faster in resolving those threats than nation states are willing or able to.

How fast is fast? Here is a by-the-numbers example of their innovations:  Since the organisation’s beginnings in 2005, C40 members have launched more than 8,000 different actions to mitigate the effects of climate change while creating new tools all cities can use to manage the massive changes that will be part of our common future. Impressively, all of this creativity is taking place against the distractions of an urban migration tsunami.

The hard truth is that cities have no choice but to lead the difficult process of adaptive change. And being a smart city (if not a MESH City) helps overcome the barriers to change we discussed in Part 1 of this story.

I spoke with C40 staff members Seth Schultz and Tom Bailey to find out how global cities are managing all this upheaval. Seth is the C40’s Director of Research, Measurement and Planning who helped create the Climate Positive Development Program (CPDP) while at the Clinton Foundation. Tom is C40’s Head of Research, a past Senior Climate Consultant at ARUP, and former strategist for the Mayor of London’s Climate Change Mitigation and Energy Strategy.

Tom, Seth and their colleagues are inspired by the opportunities and challenges they see before them. They seek to both understand and overcome the disruptive challenges—climate centred or not—cities face. Their insights into how cities not only manage change, but are innovative as well, offer important lessons on how cities can prosper in an increasingly complex world.

Carbon-smarter cities play a large part in reaching that prosperity. But as Seth notes, smarter cities are not just about things, they are about people too. He observes that the most efficient and the most inefficient family vehicles can have similar carbon footprints depending on how they are driven. In other words, the way people use technology matters as much as the technology itself.

It is a fact worth remembering.

Tom adds that the global south is leapfrogging established northern cities in the adoption of smart city solutions to difficult urban problems. There are many causes for that southern ascension. One is paradoxical. Citizens of those southern cities are being empowered because of, rather than in spite of, the fact their cities once lacked modern urban infrastructure. How is the new empowerment possible? Those places—think Bogota, Rio, or Mumbai for a few—are able to invest in the latest digitally-driven, smarter technologies and infrastructure solutions without the resistance to change of legacy systems and the bureaucracies that sustain them. In other words, the systemic obstacles to change David Miller faced in Toronto don’t exist or are not powerful enough to impede adaptation.

But people, not technology, are most responsible for the southern urban renaissance.

I think it is because many of the people there experienced the negative effects poor urban infrastructure cause. In established, northern cities, however, things like clean water, air, and transit are often taken for granted. It is human nature for those who once did without to now want better, more livable cities for themselves and their families. For those reasons, a new generation of motivated, capable people are reinventing their cities and the politics that manage them. How they adopt leading edge, smarter infrastructure matters because citizens there know it will make measurable improvements to their lives.

But urban reinvention is needed in all regions of the world, not just the south. The C40 is playing an important role in first understanding then promoting that reinvention. One example is that C40 researchers Tom and Seth are trying to understand how some resource poor cities manage to lower their carbon footprint as well as more affluent cities. Defining urban management key success factors will save time, money, and effort for everyone.

The scale of their research challenge is immense and acuracy is key to their efforts. It required the C40 to create a global standard for the effective measurement of city carbon emissions. With this standard in hand, the C40 asked its member cities to contribute to an elaborate survey covering their governance systems and their history of implementing needed change.

The survey had eleven different sections. Member city responses created an overwhelming 123,000 unique data points. Schultz and Bailey mined that big data resource for their contribution to an important, new C40 and ARUP collaboration titled, “Powering Climate Action: Cities as Global Changemakers.” The paper is essential reading for any city manager or politician.

Why is it so important? 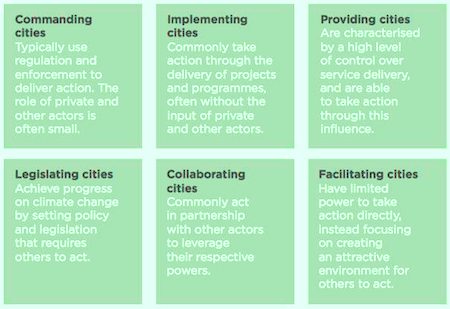 The paper begins by mapping out the interplay between city systems and functions that together manage change. It then defines the unique “power signature” types that every city has. These signatures allow for an in-depth understanding of how cities respond to climate change while they also overcome the inertia that can stifle innovation. The six type continuum of city signatures ranges from Commanding Cities through to Facilitating Cities and since all cities share these six common typologies they don’t have to excel in only one, such as power, to achieve their policy goals.

What conclusion does all that data point to in this critical investigation? Cities do not have to have powerful mayors or bureaucratic systems to be effective changemakers. In other words, even the most marginalised city can start tackling climate problems and expect to make progress.

Cities as Global Changemakers is an important, optimistic work. It is filled with examples of how city mayors can manage the needed systemic change required to deal with climate challenges. We believe that David Miller’s legacy efforts in Toronto while thwarted in their larger vision at the time, will take root in a smarter urban world. And if nations can’t lead the change, we now know that determined cities can and will.