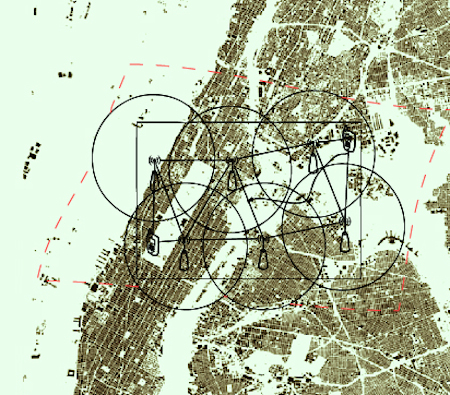 City designers and managers face the challenge of making communities digitally connected—not to mention more economically competitive. It is not a simple task. Big companies are happy to sell expensive, smart city solutions. But do they work? Does one size fit all when it comes to the city infrastructure of the future?

We understand the dilemma. That’s why MESH Cities studied the opportunities and threats posed by building connected cities.

What follows is an introduction into what we believe are the key strategic levers for making cities smarter while navigating the pitfalls of big technology.

The MESH Cities framework provides the tools to quantify, implement, and manage life-improving, digitally-enhanced infrastructure in 21st. century cities. It adopts strategies from the domains of design, economics, information technology, and culture to leverage four key forces shaping livable cities in a connected world. Those four forces are measurable. Understanding them gives city planners, managers, and citizens insights into how to navigate city-disrupting change.

The acronym MESH stands for the four, connected city forces of Mobile, Efficient, Subtle, Heuristics. The MESH framework adopts as its genesis mesh network topologies where each network node can share information with all other nodes. The concept can be used as an analog to better understand the combined information forces now shaping the post-industrial city. City dwellers are connected in real time to each other and to a growing array of urban objects in self-organizing, information networks. The complex, iterative structures of these Internet of Things supported networks create an infinite number of ways citizens can shape the modern city, much as mesh networks have almost infinite ways to connect. Our founder calls the results “the great urban symbiosis,” an agent for societal change more powerful and potentially disruptive to old ways of shaping cities than the computer age or its predecessor, the industrial age.

The acronym MESH stands for:

MOBILE represents the mobile, wireless infrastructure connecting citizens to each other and, increasingly, to the city they inhabit. The ubiquity of powerful computing and communications devices many urban dwellers now carry with them changes the way they relate to their environment. In 2015 alone more than one billion smart phones will be delivered collectively embodying a greater amount of computing power than all the personal computers ever produced. This citizen empowerment changes the way cities are used, moving us from static, top down models to dynamic, bottom up processes. An increasing array of city-improving services is being built on the burgeoning information network.

SUBTLE Cities that exhibit systems and infrastructure that are reliable, predictable, and accommodating are part of the emerging MESH Cities framework. For example, essential urban services such as transit systems that must run on time—day to day and year to year—become part of the infrastructure background to city users only when they are reliable. When infrastructure systems are not reliable resulting in traffic jams, broken water mains, or transit systems with poor on-time performance, they disrupt the urban operating system with results that cannot be ignored. Performance measuring solutions driven by access to fine-grained data sets allow city managers to engage in anticipatory load management, fix before broken, and other processes that keep essential service so reliable they are part of the background of a livable city.

HUMAN (HEURISTICS) denotes the tactical design and continuous improvement methods the people who shape, form, and manage cities can use iteratively to create responsive, livable, globally competitive cities. Heuristics models are numerous, but the ones adopted in MESH Cities are design-based feedback systems that allow citizens, government, and the commercial sector to engage in a continuous improvement of the collective urban condition. Rules-of-thumb born from city best practice information-sharing systems like ISO 37120 are used to fine turn the urban operating system.

Over the next few weeks we’ll illustrate how this framework or toolkit can be used to improve cities in an increasingly urban century.