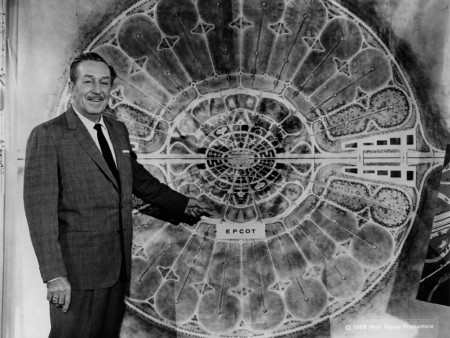 The Guardian newspaper has a section they run on the evolving smart cities phenomenon. Normally it is informative. Not today.

Smart Cities Forty Years From Now written by Michael Durham couldn’t be more wrong about the future of cities. Here’s why. Durham takes the Disney World “EPCOT” approach to futurism, and we all know how that ended. Is Walt still in that cryogenic chamber waiting for resurrection? Or was that an urban myth? It doesn’t matter. Both the man and the idea are gone. Neither will be coming back.

In 40 years’ time cities will not just be smart, they will be so brainy it hurts. We will all be working mostly from home using super-fast data terminals that relay both information and entertainment, while electric cars will transport us to shops where we will pay for goods and services with a wave of our mobile phone.

The introductory paragraph gets it about right, but we’d argue 2020 rather than 2052. Michael, where have you been?!? With the exception of ubiquitous electric cars we are just about there now. Right?

After that intro things go sideways for the simple reason that Durham’s future city demands people will have changed just about every behavioural pattern they’ve come to cherish over millennia of practice, privacy uppermost among them. Another thing; people living to 150? Forget it. It is not going to happen for the simple reason the world can’t sustain 7 billion people living an average of 55 years let alone 150. The poor people of the world would not stand for the fraction of 1%ers who could actually reach Kurzweil’s “singularity.” There’d be a bloodbath.

Why don’t we ratchet back the overheated imagination and stick to the facts Michael. Humans will be lucky–very lucky–to survive the 21st C with the numbers we have now. If we do, climate change and species extinction will mean the world will be a much different place than it is today. Profligate consumerism will be out. Working to avoid a Soylent Green scenario will be in.

That’s not to say a smart city world would be a complete dystopia. The future, if it is to be livable, would have to be maintained by smart people as well as smart governance. High carbon economies will be out. Mass education will be in. DNA factories will be busy replicating essential species once extinct or near extinct. Turns out we needed those frogs, bats, and honey bees more than the latest new car. Environmental stewards will ensure that complex, delicate ecosystems remain that way. Ocean habitat protection will be the new black. Consumer economies will be out, life balance economies will be in.

To be sure, cities will be the engine that will make all this work. But there will also be a new appreciation for the finer-grained land management invented by a new breed of entrepreneurial farmers with PhDs.

In any case, predicting the future is a mug’s game. None of us can see ten years down the road let alone forty. Who knew five years ago that Facebook would IPO at 90 billion? Thanks Guardian, but we’ll base our strategic plans for the future on reality, not fantasy. In doing that odds are we will end up designing cities that may just help us manage the challenges ahead.