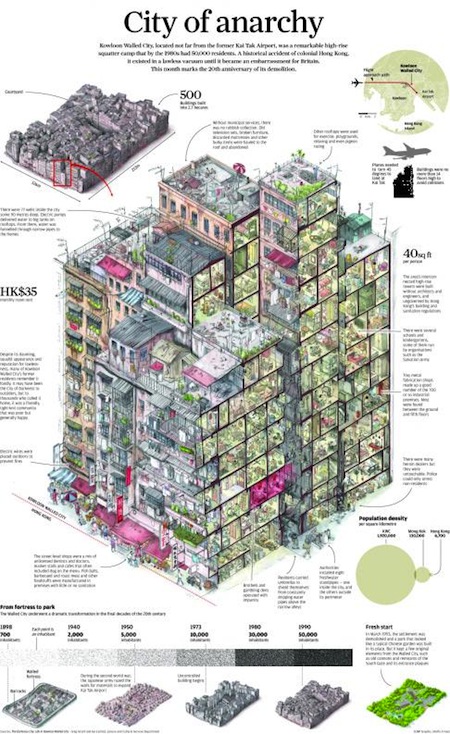 Thanks to Adam Greenfield for tweeting about this project yesterday. Greenfield linked to a masterful work by South China Morning Post illustrator Adolpho Aranz. Aranz’s subject? The demolished Kowloon Walled City, a real-life anarchist’s vision of what dense urban living could be that predated anything Lebbeus Woods imagined.

Take a look at the infographic. North American readers will find it incomprehensible that people could live in densities of around 5,000 occupants per acre. An average home there offered families 250 square feet of living space. Normal amenities like private washrooms were rare. In spite of owing its early growth to Triads, reports say crime in the city was low.

The entire project housing some 35,000 was built without official architects, planners, or engineers. Talk about real life, crowd sourced design.

The project was demolished in the early 1990s. Many of the inhabitants enjoyed life there so much they refused to leave until forced out in spite of generous relocation allowances from the Hong Kong government. Read Wikipedia’s entry for more details on this unsanctioned experiment in high-density, urban living.

Le Corbusier may well have been impressed by how occupants of the Walled City organized themselves. The master architect’s Unité d’Habitation in France also explored the relatively high densities tower living offered but with more liberal living amenities and access to open spaces, daycare, cafes, etc. 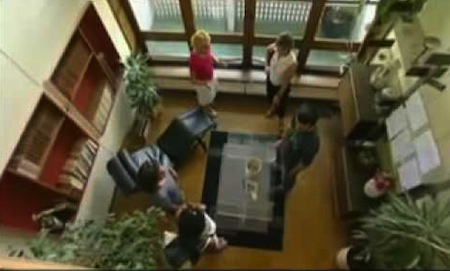 All of which leads to the fact that our engagement with high density, urban living is in its infancy. With more people than ever moving into cities, smart city designers could learn something from the haptic-like growth of Kowloon’s Walled City, not to mention from the Unité experiment. In case you’ve missed the shift, small is the new black.

Hill crowd sourced the design–more formally than Kowloon–receiving some 300 proposals for the renovation of his 450 square foot SoHo apartment. The result speaks for itself.

MESH City designers can learn from all these projects—good and bad. More than that, access to tools that allow for crowd sourced solutions to high density urban living may well be the smartest thing smarter city planners and administrators can do to position their communities for the future.