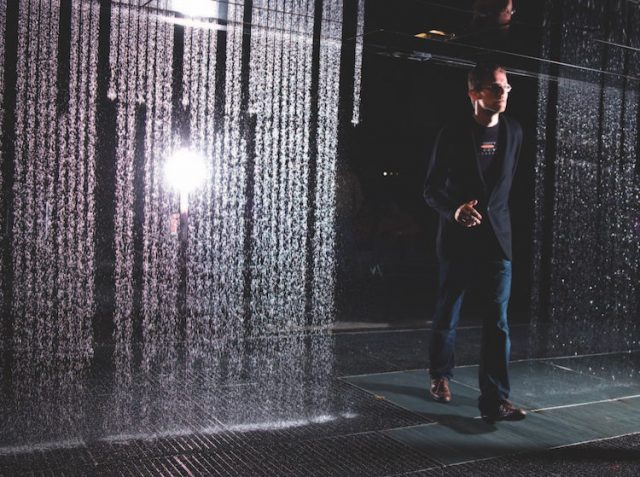 The phenomenon that has allowed robots to become so integrated into our lives is the next logical step of the digital revolution that we have been living out over the past few decades. As virtual systems become spatialised, our cities are being transformed into the so-called “Internet of Things” (IoT). The inanimate physical environment is increasingly associated with digital layers: code married to matter, physical brick to virtual bit. The city is becoming a physical companion to Big Data, even as the urban infrastructure allows for digital information to proliferate.

In fact, a full realisation of the Internet of things could be a scenario in which technology takes the form of “smart dust” – becoming so small and diffuse as to be almost pulverised, metaphorically allowing technology to enmesh with air. This, in turn, would bring to fruition a concept put forward by the late Xerox-Park computer scientist Mark Weiser, whose idea of non-intrusive – or “calm” – technology goes by the label of “ubiquitous computing”. Weiser presciently said: “Ubiquitous computing names the third wave in computing, just now beginning. First were mainframes, each shared by lots of people. Now we are in the personal computing era, person and machine staring uneasily at each other across the desktop. Next comes ubiquitous computing, or the age of calm technology, when technology recedes into the background of our lives.”

In an article published in Scientific American in September 1991, Weiser wrote: “Hundreds of computers in a room could seem intimidating at rest, just as hundreds of volts coursing through wires in the walls once did. But like the wires in the walls, these hundreds of computers will come to be invisible to common awareness. People will simply use them unconsciously to accomplish everyday tasks.” Now, what happens if we replace the word “computers” with “robots” in that quote?

The impact of ubiquitous computing – or, even better, ubiquitous robotics – on architecture could be immense. Throughout the twentieth century, architecture was often depicted in mechanical terms. It was Le Corbusier, almost a hundred years ago, who first referred to the modern house as a “machine for living in”. A few decades later, Constant’s New Babylon raised the bar even higher, prefiguring a city that looked like an infinitely extended settlement in the form of a huge network of raised platforms spanning the whole of Europe. In this “camp for nomads on the planetary scale”, human lives would unfold within enclosed, reconfigurable spaces. A little later, in 1964, the avant-garde journal Archigram published a concept by Ron Herron for a moving metropolis consisting of mobile, intelligent robotic structures that could reach any place in the world. Walking cities are also modular, with the ability to connect as well as to disperse: “Walking City imagines a future in which borders and boundaries are abandoned in favour of a nomadic lifestyle among groups of people worldwide.”

No devotee of architectural history could fail to be fascinated by these examples. But how can we bring them into existence? Without venturing so far as to match Constant’s all-encompassing utopias, we can think of certain designs that are robotic interfaces themselves. This is a field that we have directly explored in our own projects.

Our Digital Water Pavilion, designed for the Zaragoza Expo 2008, employs water as both an architectural element and a robotic interface. The building’s walls are composed of digitally controlled water droplets, which can generate writing, patterns, or access spaces. The result is a space that is interactive and reconfigurable: each wall can potentially become an entrance or an exit, while the internal partitions can shift, depending upon the number of people inside the building. The only material elements are the two boxes and the roof, which can move vertically and can even be flattened to the ground, thus erasing the presence of the entire Pavilion.

At Milan Design Week 2016, borrowing from the work of Hiroshi Ishii at the Massachusetts Institute of Technology (MIT) Media Lab,13 we presented Lift-Bit. Realised with the support of the Swiss manufacturer Vitra, this is a modular, digitally reconfigurable seating system consisting of a series of individual, upholstered stools. The elements are motorised and can be raised or lowered using a linear actuator; their height can be doubled (or halved) in a matter of seconds. Lift-Bit can be controlled in person, via a touchless gesture, or from a distance, through the use of a mobile app which includes both a series of predetermined three-dimensional shapes and a tool to create new combinations. The system is further enhanced when assembled in large compositions. In this context, activating a single stool triggers a broader effect, with the entire system recalibrating itself and generating a potentially infinite number of arrangements. Two elements together can make a chair. Four elements, a chaise longue. Nine elements, a large sofa. Dozens can radically redefine any settings, drawing new interior landscapes.

Often described as a kind of “third skin” – in addition to our own biological skin and our clothing – architecture has for too long functioned rather like a corset: a rigid and uncompromising addition to our body. Ubiquitous robots have the potential to change this.

These are only a few examples. Yet they clearly show how the scenario is changing, developing in a direction that echoes, at least in part, the imagination of the post-war avant-gardists of design.