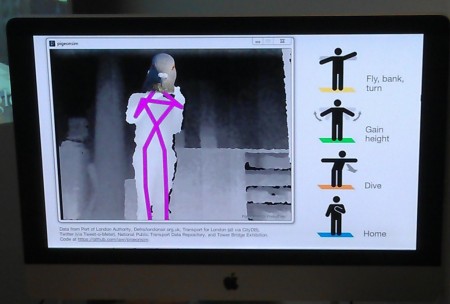 Readers may remember our previous posting about researchers using pigeons to gather real time pollution data from the skies over California. That was a year ago. So much happens in the world of big data and urban informatics in twelve months.

Now information aficionados have a better way to cruise cities—they can become pigeons too. Sort of.

PigeonSim allows us to fly over London (or at least a representation of London from Google Maps) by pretending to be a pigeon in front of a specially configured xBox camera. Fly, bank, turn, go up or dive down in a virtual environment.

As cool as that experience is, what is exponentially more interesting is that acting as a virtual bird allows us access to urban informatics in a way geographers only dreamed about a few years ago.

Spacialanalysis puts it this way:

Thanks to an Xbox Kinect, Google Earth and some programming wizardry from UCL CASA researcher George MacKerron it is now possible to fly over London. The video below shows “Pigeon Sim” which has been developed to offer a fresh way of interacting with London’s urban data. Using Peter-Pan like arm gestures (above) users can fly over London’s landmarks passing various data feeds (such as real-time tweets or travel information) as they go. Pigeon Sim is one of the most fun methods I have seen for interacting with spatial data in a long time and I can’t wait to see more of CASA’s research outputs integrated into the system. Best viewed full screen.

Open source code for those wanting to fly like a bird can be found on GitHub here.