Sarah and I left North America to look for effective models of urban living. We are searching for cities that are not trying to budget-cut their way to prosperity. From Copenhagen, Denmark through to Nykoping, Sweden, and beyond our thousand kilometre cycle journey has not disappointed us. Stockholm is our final destination on this quest for the best in modern city building.

White Architects is a local architecture firm dedicated to the aspiration Stockholm has to be the world's cleanest, most livable large city. We are staying in a hotel they designed.

The Clarion Sodermalm is built over one of Stockholm's major transportation corridors, but in spite of that proximity is surprisingly calming for a couple of road weary cyclists. In a way the hotel is much like the city itself–big, but the architects designed it to celebrate the realities of city life. To make the stay here even more in line with our goals, the manager tells me that about 20% or so of guests use carbon offsets to green their visit—only in Scandinavia.

Our room looks south over a highway. And what a highway. Outside the window is a Pragnellian, conurbation-inspired mesh of roads, bridges, canals, and transit systems that ought to be a disaster for urban living except the city's planners hid the highway under the city. We overlook a piece of the roadway that emerges to span the water surrounding Sodermalm Island (take a look at the film).

Beneath us the road tunnels through the drill-dulling granite base Stockholm rests on. Its endless traffic runs north for kilometres. The cost of such engineering must have been enormous, but the city paid that price to have highways serve livable neighbourhoods rather than the opposite.

A three minute slice of Stockholm beginning with a view from the Clarion Hotel and ending with a quick video tour of the Hammarby District.

Stockholm even designed the tunnel to be an aesthetically rewarding experience. "Since its inauguration in 2004," Publicerad writes in 2008, "the tunnels have attracted international visitors who want to see and learn more about how, using light, art and common sense, it is possible to create "an attractive environment and a worthy space for people that has been designed with care." If they put this much thought into tunnel design imagine what they do for the design of livable cities.

We don't have to imagine long.

White Architects has also been a major contributor to the Hammarby development, a project urban designers everywhere point to as the smart model for housing people in our world's growing cities. Hammarby is a sustainable community built on the industrial lands just over the bridge from our hotel. It was part of the city's plans for an Olympic game's bid, but when that was awarded elsewhere politicians here decided to go ahead with the scheme anyway.

The effort was worth it. They even have a name for it–the Hammarby Model. Here is how their web site introduces the development: "Everybody who lives in Hammarby Sjöstad is a part of an eco-cycle. The eco-cycle solution… handles energy, waste, sewage and water for both housing and offices… Energy consumption and waste production are to be minimized while the resource saving, reusing and recycling are maximized." 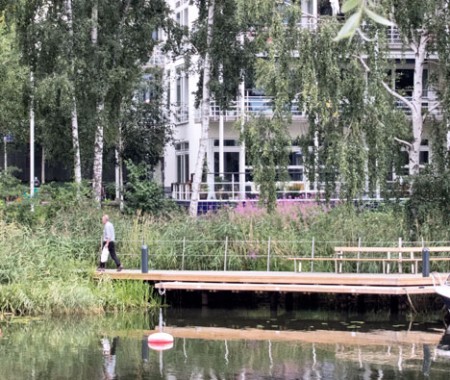 Their goals are the reuse and transformation of old brownfield sites into attractive residential areas with well-designed parks and green public spaces; the use of renewable fuels, biogas products and reuse of waste heat; the use of new technologies for water saving and sewage treatment; a reduction in waste; the creation of fast, attractive public transport, car pools, and extensive cycle paths. 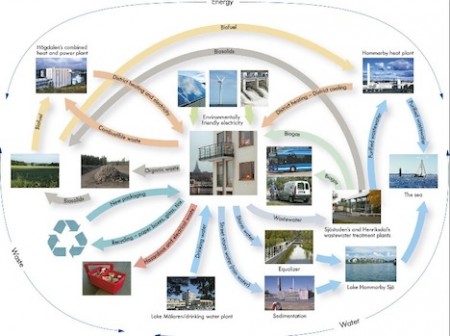 Hammarby achieves these goals and more. Overlaid on the functional aspects of the development are well-proportioned buildings and inspired landscape design. The overall mix works. This is one more Northern European housing development that illustrates what can be achieved when civic policy and urban design enhance each other.

From Copenhagen's Linear City and Nordhavn, to Gothenburg's Eriksberg, to Stockholm's Hammarby, city designers here show how people of all incomes can be housed comfortably and sustainably.

All good things must end. We arrive back in Toronto just in time to hear more about how our city council can't afford any city building ideas. City deconstruction is on their agenda. Doing more with less is not on the political books here. Doing less with less is.