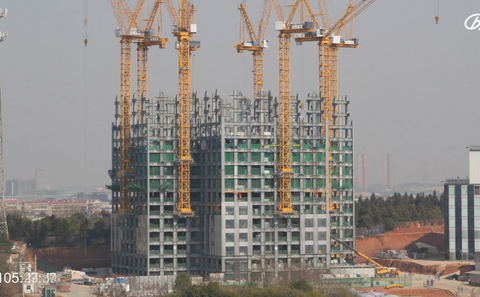 The Broad_Group gained global fame in 2010 after a time-lapse video appeared online showing its crews constructing a 15-storey hotel in six days. MESH Cities readers can look at it above.

While not quite what modular building pioneer Buckminster Fuller had in mind, Broad Group’s construction methods reduce assembly time while making for remarkably energy efficient buildings

Broad Group is a private company based in Changsha, China. Since 1996, it has been the global leader in manufacturing central air conditioning non-electric absorption chillers that are powered by natural gas and waste heat. Broad Group currently export products to over 60 countries. It was Shanghai Expo 2010’s only global official partner that was a Chinese private enterprise and the exclusive supplier of central air conditioning, ventilation and air purification products for the event.

Broad is one of the few Chinese manufacturing companies that has been widely recognized for its green policies and commitment to countering climate change. It has expanded its business in recent years to include other energy saving products and sustainable buildings…

What is remarkable about the Broad Group’s story is its evolution from HVAC to building manufacturing. Again, the adoption of mass production techniques for the building industry is an idea Fuller advocated after the second world war to use the aviation sector’s manufacturing capacity and know-how. Fuller found that governments preferred to keep the building sector inefficient for the simple reason that it created jobs for many unskilled workers.

China, on the other hand, is building out its infrastructure so fast that labour issues are not a problem. They can afford to get close to fully automating the building cycle. MESH Cities will follow this evolution of building especially as it benefits from the mesh-driven feedback loops of urban super users.

The World of Buckminster Fuller by microcinema