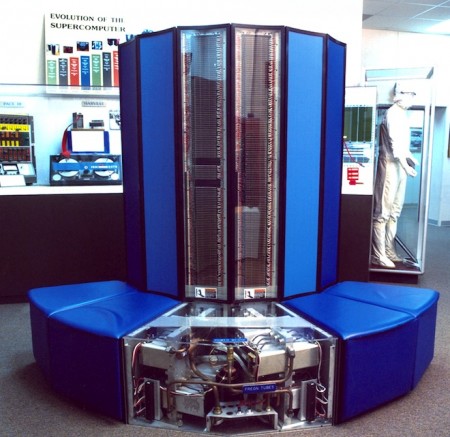 A Cray Super Computer of the 90’s. Image: NASA

(This story was originally published in the Ontario Planning Journal, Fall 2016 edition)

Smart, mobile technologies are lashing a wave of change that will wash over our cities with the metaphorical force of a Pacific tsunami. When it hits it will first disrupt then reinvent how we design our streets and use our public spaces. It will even change urban economies. Is your city  prepared?

The early effects of that change are seen everywhere, even though the technologies causing them are still in their relative infancy; but, cities have only felt the tsunami’s initial warning tremors. The real wave of disruption has yet to reach their urban shores. When it does crest then wash away, what will streets look like? Will we be left, as Rem Koolhaas observes, with a hollowed out, Generic City where essential parts of urban life have crossed over into cyberspace? Or will the wave sweep away the worst residues of 20th Century cities and give us a chance to do it better?

That is the hope. In spite of the pain change can bring, not all change is bad—far from it. Change can be restorative. The great urban and architectural design disruptor Buckminster Fuller offers this insight into the benefits of change:

“You never change things by fighting the existing reality. To change something, build a new model that makes the existing model obsolete.”

Whether we are prepared for them or not, new models are on the way. And I think they are coming just in time.

Why? If, for example, your existing urban space reality is Rob Fordian—one where cars rule while pedestrians and cyclists serve—then that model is about to be turned on its head. Car culture as the macro force of cities is on the way out. Waiting in the wings are an ever-increasing number of smart, digital technologies working synergistically to make the auto-centric urban model obsolete.

Change like that is urgently needed. In the last twenty-four hours as I write this, a pedestrian and a cyclist have died on Toronto streets and twenty more were injured because cars hit them. From a personal perspective, last week a colleague of mine died after colliding with a car while cycling with forty other recreational riders. If the existing way we design streets doesn’t need a new model, nothing does.

Why will the tsunami of tech-driven change be able to create new urban models that enrich rather than neuter cities? Let me answer with some historical context.

Twenty-five years ago if someone said you will soon walk down the street with the equivalent of 58 Cray2 supercomputers in your shirt pocket, you’d probably have laughed at them.

Yet here we are. The biggest force behind the disruption of existing notions of public space is the staggering amount of computing power in our pockets. And you thought it was just a phone. In fact, our communication devices are city reinventing, mobile supercomputers. The iPhone 6, for just one example, is exponentially faster than the Cray2’s that guided nations in 1989.

When these GPS enabled, spatially aware phones network to create instant, ad hoc communities of interest, they reshape the functions of our public spaces. It happens relentlessly, without stop, day after day, creating more and more possible iterations. While the majority of those iterations don’t alter the physical world, and may involve inane things like scoring Pokémon points by visiting certain public landmarks, some others survive the trial by fire of real-world usefulness.

Almost every service, institution, system, and, by extension, public space in a modern city will be disrupted by the growing influence of ubiquitous, mobile computing. Even more jarring to the often caught-off-guard regulatory class, the resulting public spaces are usually not designed by specialists. They evolve from the user up but work just fine without our input, leaving planners and managers to backfill as best they can to institutionalize the results.

All the upcoming change, however, doesn’t start and finish with user-empowering mobile devices. With the soon-to-be pervasive Internet of Everything—where urban objects are in themselves autonomous computers—we enter the realm that theorist Mark Shepard calls the Sentient City or what I call a MESH City (MESH = Mobile; Efficient; Subtle; Heuristic). When people with their mobile devices connect with ubiquitous, smart, urban objects then the speed at which we create these never before imagined public realms accelerates.

I say never before imagined in the context of the consumer or citizen market where the pace of innovation and invention is in hyperdrive. In the business to business or the business to institution market, academics, researchers, and developers have long been aware of the city-improving power of smart technologies. But their perspective on change had its shortfalls. It was just too slow.

Remember, smart cities as an aspiration got traction in policy circles about a generation ago. MIT’s Dr. Bill Mitchell explored the ICT-driven dematerialization of city infrastructure in his book, ”City of Bits.” Other researchers, like those at the Brookhaven National Laboratory, made public the ideas they thought were the next big thing—efficient cities.

While the consumer Internet was thrilled over the ability to order pet food online, these bright US researchers looked to the urban future, and it was wired. They were convinced that a ubiquitous computing urban nirvana was just over the horizon.

Brookhaven’s staff offered this far-sighted vision of what a smarter city would look like:

“The vision of “Smart Cities” is the urban center of the future, made safe, secure, environmentally green, and efficient because all structures – whether for power, water, transportation, etc. are designed, constructed, and maintained making use of advanced, integrated materials, sensors, electronics, and networks which are interfaced with computerized systems comprised of databases, tracking, and decision-making algorithms.”

What’s interesting here, and where we are introduced to the evolving dichotomy around the making of MESH cities, is that these researchers imagined city-changing innovations in a top down, command and control environment. They never predicted that the biggest public space innovations would come from the consumer sector. To them smart cities of tomorrow look more like IBM’s Rio Olympic control centre than they do bottom up, small-scale consumer solutions that when networked together are more than powerful enough to remodel the normative use of cities.

Think about it. On the consumer side we have Uber, Air bandb, google, tesla, and PowerWall (not to mention a million other Apps and products) all creating city-disrupting innovations. On the public infrastructure side we get smarter traffic lights, power grids, and water management. While the two forces are symbiotic, which one is driving the public space changing bus?

I’d argue that consumer players are behind the wheel mostly because they can engage in the process of disruptive innovation and useful reinvention far more quickly than institutional markets can. That insight shouldn’t be a surprise to city design professionals. How do you think cars took over Twentieth Century cities? Affordable automobiles were the killer App of their era. Everybody had to have one. An avalanche of consumer buying choices resulted in car-centric cities. Maybe Koolhaas is too close to those car cities to see them as the true generic model.

So, are city planners and designers ready to manage the disruptive changes technology brings? Not quite yet.

There are systemic barriers that prevent decision makers from quickly adopting the MESH City best practices available to them. Among the organizational hurdles, for example, are issues with budget approvals for products that don’t have long track records; or recalcitrant buyers who want to keep their supply chains simple; or even politicians who don’t want to be blamed if some desperately needed but new solution is a failure.

How, then, do we overcome resistance to change? The question may be moot because when this change hits, as happened with cars, it will reshape the market in its likeness. That’s the tsunami that is coming whatever it may ultimately look like.

Fortunately, there are also new tools that will help us better understand and/or adapt to the inevitable changing uses of public space. Big Data working hand-in-glove with Virtual Reality and Augmented Reality systems like Microsoft’s HoloLens and Google’s Magic Leap will offer city managers the ability to holographically experience and test public space-changing models. That ability will save developers and regulators millions if not billions of dollars. Furthermore, because of the ubiquity of mobile computing, almost everyone in cities will get to virtually explore proposed public spaces long before they are built. Informing citizens through new communications channels will reduce the chance of poorly thought out, expensive urban solutions being adopted without proper oversight. That’s real change.

When I launched MESH Cities I adopted William Gibson’s phrase, “The future has arrived, it is just not evenly distributed,” as the casus belli on inefficient and uninspired cities. My intent was to start a platform where those involved in the making of modern public spaces could exchange best practices to distribute that future for the benefit of all.

Good news—we are still working on it, and some day soon we’ll have an App for that. Please join us as we pursue an optimistic, non-generic future.