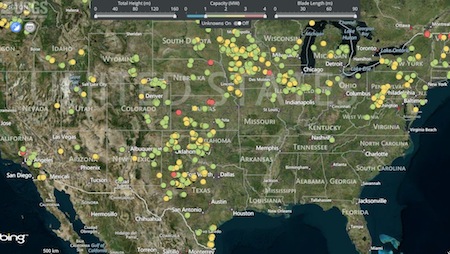 The US Geological Survey office has released an interactive, big data map of wind turbine installations in the continental United States.

Sharing MESH best practices between the world’s cities is one of our mandates. That’s easier said than done in a world where information flow is asymmetric. Why? If your politicians and/or citizens don’t know their urban environment can be better than it is today, they won’t demand city best practices information.

But if you live in a city where the air is clean, transit works, and people are employed just try and take away the infrastructure and management making those benefits possible. There would be hell to pay. Who would choose to go backwards to the city best practices dark ages? Our job is to foster a need for urban reform. We do that by levelling the information playing field, especially in cities where relatively small investments can change the lives of their inhabitants for the better.

It is an idea that makes sense.

That’s why when we came across the USGS office’s Wind Turbine Map it reinforced our belief in the importance of good government. Their interactive map makes visible every known inland wind turbine and includes key metrics on their height, blade length, power output, and date of installation.

All of that is useful—to say the least. We’d also like to add to it some qualitative information. For example, just how much carbon-based fuel have these installations saved the US? How many home years of electricity have these turbines powered? For that matter, how many city years? Clean, renewable energy is essential to 21st C. cities after all.

Even more persuasively, how many US lives have these turbines saved from cancers and the other health maladies caused by inhaling burnt carbon?

Just how much energy are wind turbines producing? The US Energy Department publishes that in 2012:

. . .  over 13 gigawatts (GW) of new wind power capacity were added to the U.S. grid – nearly double the wind capacity deployed in 2011. This tremendous growth helped America’s total wind power capacity surpass 60 GW at the end of 2012 – representing enough capacity to power more than 15 million homes each year, or as many homes as in California and Washington state combined. The country’s cumulative installed wind energy capacity has increased more than 22-fold since 2000.

That information is truly impressive. We maintain that if people had greater access to understandable information about important issues like the health of their families, the visceral dislike of new, unfamiliar energy systems would be balanced against long term benefits. In an age where information “wants to be free,” the growing ubiquity of smart devices will empower city dwellers to first learn then act upon city best practices.

A worthwhile idea to ponder on a Saturday morning.... what are the odds?

I will be on @checkupcbc today talking about shopping. Well really, about 1.5 degree lifestyles. https://www.cbc.ca/radio/checkup/can-we-shop-our-way-out-of-the-climate-crisis-1.6247473/government-policy-can-limit-climate-change-but-so-can-changing-your-shopping-habits-say-experts-1.6248260

1. 35 or 36 years ago, I got a warning about sprawl from a guy named Michael Warren. At the time he was head of Canada Post (though not for much longer). He had previously been head of the TTC. He was sitting next to me at a luncheon and much in the news at the time.

A friend showed me this picture today, from @CityKitchener. Being so deep in the Toronto bubble, I had no idea they'd approved 10km of cycling improvements through downtown, including 2.8km of fully separated, protected lanes. Look at this! 😍

Flying Officer Lloyd George Speyer, who I am named after; his grave in Berlin. There is a lake near Parry Sound, Ontario named after him. 20 years old.

An important opportunity opens up to reconceive a sterile downtown monoculture as new data shows number of workers in financial district is still down by 77 per cent — and experts say it may never recover https://www.thestar.com/business/2021/11/10/new-data-shows-number-of-workers-in-financial-district-is-still-down-by-77-per-cent-and-experts-say-it-may-never-recover.html via @torontostar

Claude Cormier has made a $500,000 commitment to his alma mater, the Daniels Faculty to support remarkable Masters in Landscape Architecture students, and to bolster recognition for the importance of the landscape architecture profession.