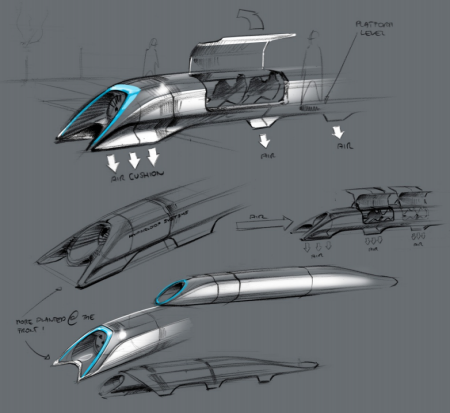 As global cities continue their evolution towards MESHness, big trends are emerging to help government and industry collectively invest in a global future.

How big are the trends? Real big. Ask Elon Musk.

This week Mr. Musk announced his open source plans for a high speed "Hyperloop" train service running from Los Angeles to San Francisco. Musk, as many of our readers know, is the serial entrepreneur who helped bring the world PayPal and the electric car company Tesla Motors. When he makes predictions about new technologies the world's press listens. So do governments.

What makes this project different from the abyss of lost, North American, high speed transit plans is its assumption that government alone is not going to make it happen. Musk is raising an "X" prize-like flag by making the future of commuter travel aspirational: Hey everyone, you can live in LA, but work in San Fran . . . really!

That's an idea the public can get behind—forget the lurching back and forth in a train that takes twice as long as air travel—I want that Hyperloop thing. Is California on its way to being the centre for clean tech innovation? Musk would say yes. Capital + People + Ideas + Market = Innovation.

The big obstacle in the way of building out a smart, energy-efficient urban future isn't the lack of good ideas or financing. No. The block in the North American urban artery is the way our governments are failing to respond to the challenges of population growth and climate change. But Musk and others think big ideas can jump the puddle of governance stalling.

If the Hyperloop model is one way of kickstarting government rethinking of our regional transit systems and, in turn the way our cities work, what is another model in use that has the potential to build tomorrow's intelligent cities today? One such approach is in the "Clout" initiative based on a collaboration between Japanese and European interests.

ClouT = "Cloud of Things for empowering the citizen clout in smart cities."

Rather than taking the big splash approach to concept launches, ClouT's take is to slowly build a consortium of partners intent on positioning themselves at the centre of an important, expanding market. Here are mappings for the players involved: 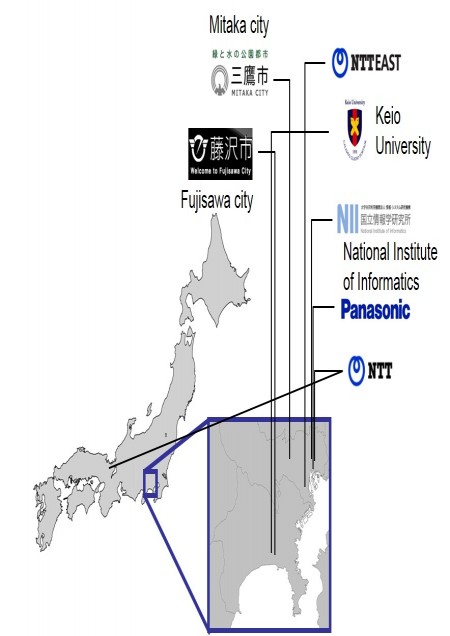 This is an impressive collection of participants, and as we noted in a previous posting, Santander may just well be the world's smartest small city. The way markets work—not to mention people—is on the "show me" principle. Show me it works and is cost effective and maybe we'll adopt it. Santander plays an important role in the consortium by doing just that.

Rather than offering a slick, ultramodern image as its main promotional calling card, ClouT focuses on the cloud computing networks it believes will form the heart of cities. One important thing: rather than end-users being at the bottom of the pyramid as seen in most I.T. charts, they are at the top along with the cluster players who will make smart cities a reality. Nice idea. People change governments after all. 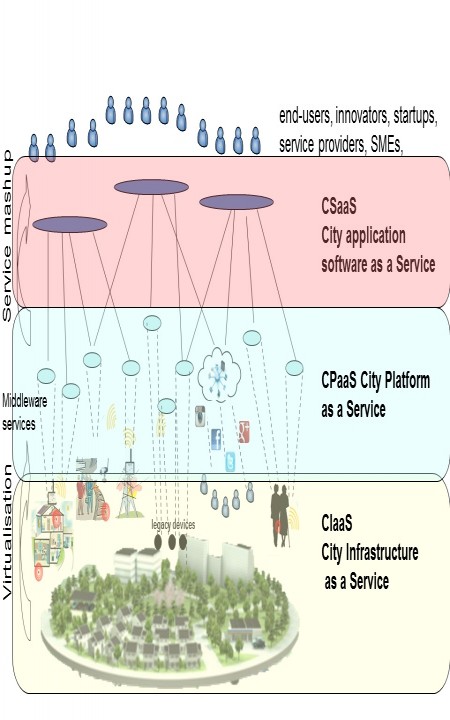 Here is how ClouT describes its activities:

ClouT’s overall concept is leveraging the Cloud Computing as an enabler to bridge the Internet of Things with Internet of People via Internet of Services, to establish an efficient communication and collaboration platform exploiting all possible information sources to make the cities smarter and to help them facing the emerging challenges such as efficient energy management, economic growth and development. ClouT will provide infrastructures, services, tools and applications that will be reused by different city stakeholders such as municipalities, citizens, service developers and application integrators, in order to create, deploy and manage user-centric applications taking benefit of the latest advances in internet of things and cloud domains. ClouT with its user-centric approach, will also offer to end-users the possibility of creating their own Cloud services and share them with other citizens . . .

.  .  .  ClouT’s ultimate goal is to join the forces and create a long-lasting synergy for smart city initiatives between Europe and Japan.

Note that US and Canadian cities are not part of the mix. Too bad, they'll be behind the curve on the next big thing when it comes to industries driving regional economies. Some big NA players like Cisco and IBM (if in a global economy you can still call them NA based) are trying to stimulate local interest in the Intelligent, Connected City marketplace with little traction so far.

Maybe they should ask Elon for a hand.