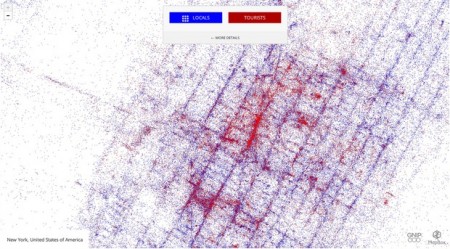 While researching the use of mobile devices in cities last week I came across the Map Box site. One part of that site investigates the geo coordinates of twitter traffic identified by the smartphones used to tweet. A database of about 250 million tweets was the foundation of their big data map.

In terms of ranking, the Android OS is in first place due to its Google-esque ubiquity. Apple’s iPhone is next, then Blackberry, and then “other.” The maps show Android originated tweets as green, iPhones as red, and Blackberry tweets as purple.

While that basic information is useful for smartphone marketers, what our readers will find illuminating about these data, outside of what proportion of the world’s urban dwellers use what phone, are the insights offered into city densities, major traffic routes, population clusters, etc.

The MapBox blog describes it this way:

This is a look at 3 billion tweets – every geotagged tweet since September 2011, mapped, showing facets of Twitter’s ecosystem and userbase in incredible new detail, revealing demographic, cultural, and social patterns down to city level detail, across the entire world. We were brought in by the data team at Gnip, who have awesome APIs and raw access to the Twitter firehose, and together Tom and data artist Eric Fischer used our open source tools to visualize the data and build interfaces that let you explore the stories of space, language, and access to technology.

This is big data, and there’s a significant level of geographic overlap between tweets, so Eric wrote an open-source tool that de-duplicated 2.7 billion overlapping datapoints, leaving 280 million unique locations.

Here are a few city/tweet screen shots taken from the Map Box site: 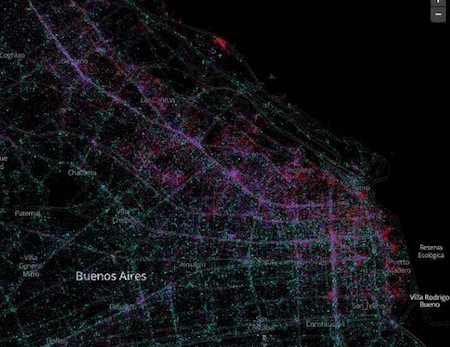 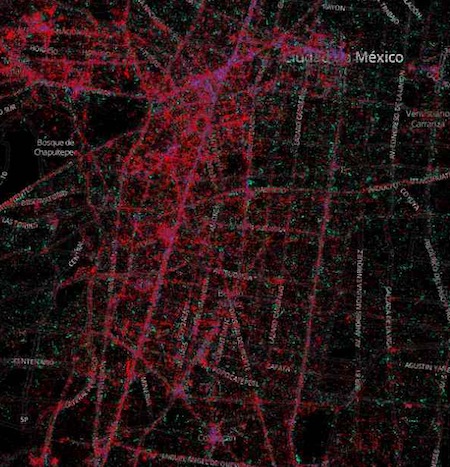 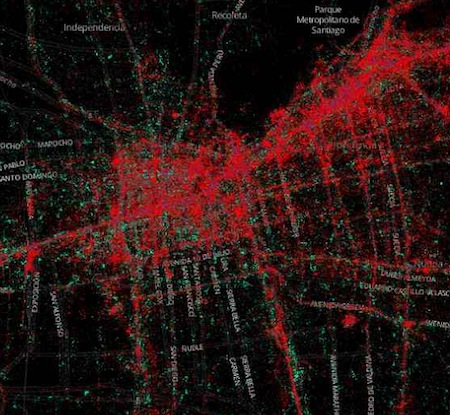 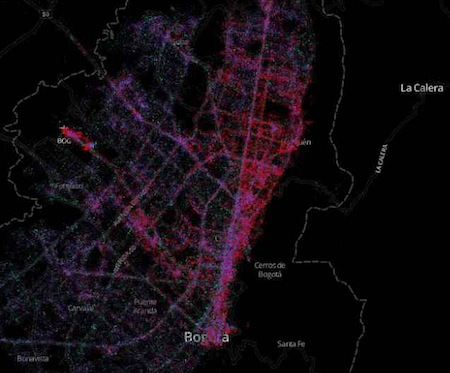 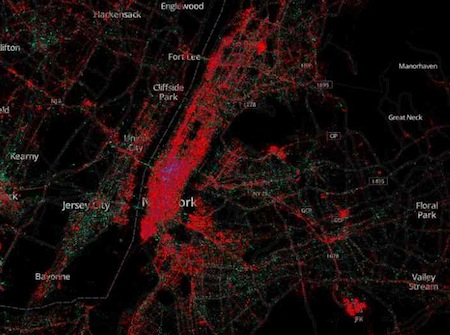 If city planners focused these snapshots on specific, finer-scaled neighbourhoods, would it help guide community development in a rational way? Of course, we are making an assumption in terms of what percentage of the population has access to smart phones, but soon they will be as ubiquitous as cell phones. Even framed by today’s market penetration this data is likely more useful than the thousands of typical traffic surveys that analyze auto traffic while ignoring, for example, important city functions like pedestrian use.

MESH Cities as an initiative is based on the idea that intelligent, livable cities are created by an informed, intelligent citizenry. Technologies like mobile devices or the Internet of Things are not ends in themselves. They are tools that can help smart people make smart decisions. Over the next decade city planners will need more inclusive, powerful ways to guide urban development if we are to house five billion people in ways that are even remotely sustainable.

Projects like this one, along with digital initiatives like Open Source City Apps, have the potential to improve our understanding of the complex systems that are the cities of tomorrow, today.