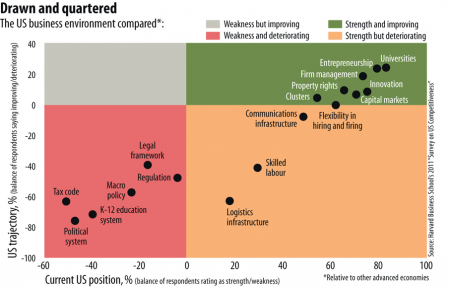 Strengths and Weakness of the US Economy (source Harvard/Economist)

How does the US regain its competitive edge and get greener not to mention smarter while doing it? The Economist’s “World In 2013” offers up business guru Michael Porter’s eight steps towards US competitiveness, and it will not surprise MESH Cities readers that working smarter not harder is the key. Well, that and investment in modern infrastructure.

At the core of Porter’s argument is that the US cannot continue to compete globally if it continues to accept declining living standards for its workers as the price for corporate profitability. The US economic juggernaut of past eras balanced opportunities for both sides of the economic machine. Somehow the country has lost the importance of this economic truth as it opened long term, global markets at the expense of its own economy.

People, not companies, are the engine of all economies in an “anti-fragile” world (the reference to N. Taleb’s concept is mine, not Porters, but in this case the two writers have some similar views). Furthermore, the US economic system is mired in contradictory means and ends driven regulations that have to be addressed.

For MESH Cities’ contributors the greatest emphasis outside of regulatory policies must be focused on Porter’s 6th point: Improving logistical, communications, and energy infrastructure. Only that initiative will provide the sustainable, livable environments capable of supporting economic prosperity as a whole.

Here are Porters eight steps. Please refer to the Economist for more details.