The MIT Media Lab announced the successful commercialization of the CityCar:

The MIT Media Lab foldable electric CityCar was unveiled at European Commission headquarters in Brussels on January 24. The consortium is negotiating to place a fleet of 100 CityCars in Brussels next year. Branded Hiriko, which means urban in the Basque language, these two-passenger micro cars are just two meters (6.5 feet) long and weigh 450 kilos (1,100 pounds). The passenger cabin can slide upwards as the wheels roll together, folding the chassis to minimize the car’s footprint when parked. When folded, three CityCars can fit into one traditional parking space, making parking much more efficient in crowded cities. The Hiriko’s electric motors are in the wheels, called Robot Wheels. Each Robot Wheel can be independently controlled, allowing the CityCar to execute tight maneuvers such as spinning on its own axis to achieve what MIT calls an “O-turn.” The Robot Wheel modules are controlled electronically using by-wire systems made popular by the aerospace industry. The CityCar runs on two rechargeable lithium-ion batteries with a range of 120 kilometers (74 miles). Its top speed is curbed electronically to comply with speed limits in city centers. Several cities have shown interest in the CityCar – Barcelona, Berlin, Hong Kong, San Francisco, Malmö in Sweden, Quito and the Galapagos Islands in Ecuador and Vitoria-Gasteiz, the second largest city in the Basque region. 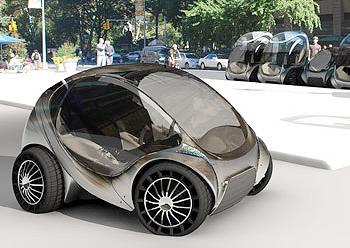