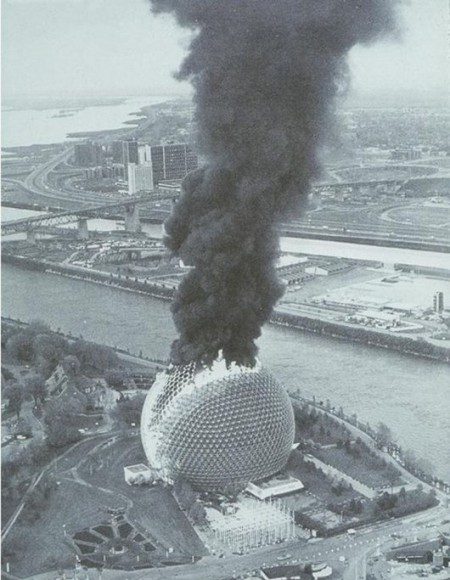 Have our aspirations for sustainable, livable cities of tomorrow been burned to the ground? Image: B. Fuller’s Expo67 Habitat dome in flames.

“It’s not the strongest of the species that survive,
not the most intelligent,
but the ones most responsive to change.”

In a world where massive technological and social change is the norm rather than the exception, cities are the front line response to that change. But are they up to the task? We’re not sure. Change is hard to manage and the many top down, command and control policy mechanisms modern city planning departments adopt may make them unresponsive to systemic disruption. Why? The economic and social theorist Nicholas Taleb—the man who coined the term Black Swan event to describe rare but predictable system failures—believes complex systems must not only be responsive to disruption, they must also be “anti-fragile.”

What is anti-fragile? Taleb describes it as a condition where a system or organism is strengthened when attacked. That is different than just maintaining the status quo or relative equilibrium. The concept also goes beyond robustness or resilience. It describes a condition where an entity absorbs unpredictable or even chaotic negative forces turning them into fuel for positive growth. In many ways it mirrors the broader trajectory if not the actual processes of evolutionary change as suggested in the quote above.

Jane Jacobs understood the concept. Jacobs’ planning advocacy for small, walkable neighbourhoods over large urban road networks is one example. She argued that finer grained social systems are more adaptive to disruptive change than are their big-brother alternatives. Similarly, Taleb offers Switzerland’s Canton political structures as examples of a fine grained, anti-fragile societal system. Decade after decade that country outperforms almost all others across a range of indexes because, he stresses, of its limited central government and strong local representation.

Disruptive technologies are at the gate. There are dozens of new IT combinations that will fundamentally change broad segments of design, work, and life in cities—not to mention the cities themselves.

Cities continue to swallow up arable land. We just passed the 50%-of-the-world-population-living-in-cities threshold. Soon it will be 60% in a world population of eight billion. Those numbers will overwhelm city planners in part because their profession has not grown as quickly as the social and technical threats it faces. In fact, the planners’ focus on maintaining a kind of urban homeostasis may well be leading cities to that black swan scenario Taleb warns about. After all, what happens to modern cities when they continue an infinite growth is the answer model? Ask any mathematician. A finite system planning for infinite growth is, well, not a strategically sound idea. We’ve been able to get away with it for a century or so because population growth coincided with the extraction of legacy carbon-based energy supplies. Those days have come to an end although the vast majority of urban dwellers don’t know it yet. They will when the fragile ecosystem falters.

The obvious logical contradiction of limitless growth is the reason why smart cities are increasingly seen as a panacea for the problems faced by today’s cities. Rather than deal with the difficult policy issues thrown down by increasing populations and shrinking resources, leaders are doubling down on the bet that more city-system “efficiencies” are the answer. Smarter cites are part of the answer to be sure. The other part is better system design which includes all those messy policies that must be changed but don’t get politicians re-elected because they cost taxpayers money. That’s why we advocate for MESH Cities as a solution framework. We know that technology alone is not the solution to the many problems we face on our increasingly difficult evolutionary path and we can’t keep kicking the can down the road for others to deal with. There is no more road.

Even worse, the generic smart city carries with it new problems even if it solves a few old ones. The organizational trend spuring smart city growth is one best described as a more user-friendly surveillance state. We can do better than that especially since that tactic will cause a citizen blowback that will make getting funds for sustainable, much needed infrastructure harder to obtain. On the other hand, an anti-fragile, MESH City model allows for better bottom up governance like the Swiss Canton model, while also shrinking recalcitrant bureaucracies through better, two way, information flows. A MESH City’s functions are not premised on tracking citizens. They are meant to prepare urban environments for the challenges ahead by working, with the best information available, to ensure cities get stronger when faced with disruptive change.