A now famous argument began when Richard Florida released “Who’s Your City” and put forth the idea that the world is not flat but spiky. Florida took aim at New York TImes columnist and author Thomas Friedman who had earlier, and somewhat famously proposed that the world is flat (of course metaphorically, but I am sure there are some anti-science people out there who think a round world is just a “theory”).

A condensed version of the two perspectives goes something like this: The world is spiky because talent, economic activity, and innovation cluster around the world’s most successful cities. The areas in-between those cities tend to be low economic zones. On the other hand, the world is flat today because communications technology, global supply chains, and manufacturing capacity work together to push a middle-class lifestyle out across the globe. Here geographic distance and cultural differences are no longer barriers to economic growth.

So who is right? Florida or Friedman? And how do MESH Cities influence the ascendancy of one world view or the other?

I ask this question for the sake of a student at the Rotman school of management. Last Friday I gave a talk there with the working title of “How can MESH Cities drive innovation?” The basic premise of the talk was that in complex, rapidly changing markets linear and predictive innovation techniques are unable to drive the kind of responsive change needed to be successful. To be innovative in those markets requires a different innovation model, one that is distributed and/or crowd-sourced. 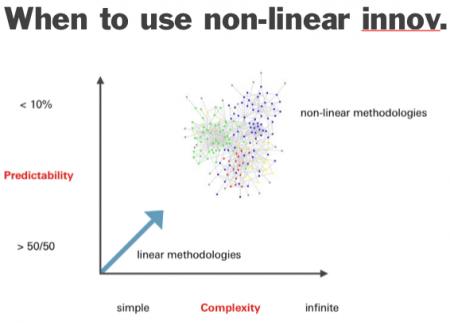 The student asked–in the context of building sustainable cities–if MESH City principles could be applied in, say La Paz as effectively as in Toronto. Good question.

This is what got me thinking about the Florida/Friedman dichotomy. MESH Cities, I would contend, do not have to align with spiky cities. In fact, in the technological shift away from copper-based communications systems, not having vast and expensive legacy networks to pay off has worked well for cities who leapt into the 21st C. wireless, mobile world. That is why many so-called third world cities boast faster Internet speeds than available to Torontonians.

We are seeing major information technology companies pushing the so-called smart city market solution. Take a look at the map on the home page of this site. None of those smart cities are in the world’s top 100 rankings. But are they MESH Cities any more than a Tokyo or New York? At this stage in their development it is impossible to say. Most are works in progress. None-the-less, the advance of mobile communications technologies, ubiquitous computing, and ever-expanding logistics networks is, from my perspective, making for a flatter world.