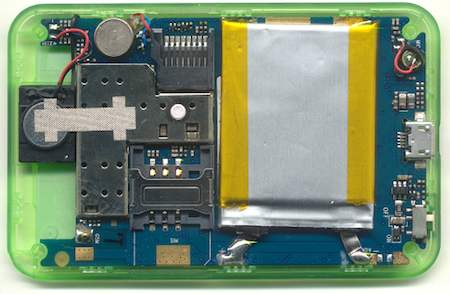 The multifunctional Arduino is as close to a ubiquitous digital platform as the world has seen, and its standards-defining popularity fuels research and development in the IoT realm. But, to be honest, it is not that smart or powerful a device.

A typical Arduino board sells for about $25 or so. It runs a 16MHz, 8-Bit processor that is good enough for most low-end applications. In terms of complexity or processor speed, specs like these are a long way from those offered by even the most rudimentary cell phones. That’s why when we came across an open source cell phone selling for $12 in China MESH Cities editors imagined how many ways advanced technologies this cheap are going to change the way we design and use cities.

The Gonkai—as the device is nicknamed—may be cheap, but it offers technologies that make the Arduino look like a basement hobbyist’s platform—which it is. For twelve bucks the Gonkai comes with a CPU speed 260 MHz, 32-bit processor; 8 Megs of Ram; USB, microSD, SIM interfaces; GSM and Bluetooth; Lithium battery and adapter; and a two colour OLED display. And remember, that $12 is retail.

How is it possible to make this kind of tech for about $8-10 a unit? Moore’s Law explains it; however, some technological leaps have more to do with magic than they do with market forces. The Gonkai may be one of them. We’re joking of course. Still, products like this one may just be a curse that signals the death of cell phone makers like Nokia, a company selling similar products at a much higher price point.

What does open source cell phone innovation have to do with MESH Cities (and remember, by MESH Cities we mean the next generation of smart cities)? Let us explain.

Think back to when Microsoft controlled just about everything when it came to the PC market. Sure there was Mac with about 3% of the PC user base. None-the-less, if you created new Apps they mostly were for the Windows OS. Then came Linux and the market began to change. Linux you may remember was open source software. Thousands of geeks inspired by the inimitable Linus Torvalds worked tirelessly to build a better OS. And they succeeded.

Now the Chinese are doing for cell phones what Linux did for the PC: shaking up the established order. The “Gongkai” or “Open” cell phone gives the same developers who now use the Arduino-based IoT platform access to much more powerful—not to mention—connected technologies at a fraction of the price. Mash that power with new, open source Smart City platforms like Contiki and we have an IoT tool clever entrepreneurs will use to take on some really “wicked problems”  cities face.

What’s more, at this price point those solutions are inexpensive enough to be rolled out everywhere (or, as Adam Greenfield so cleverly paraphrased, “everyware“).