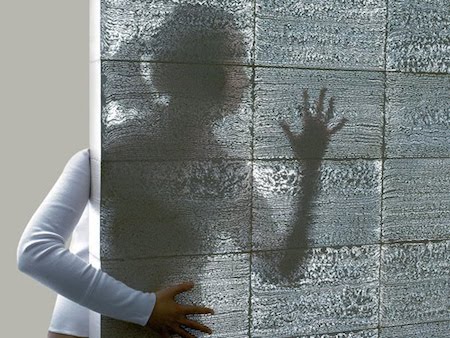 Translucent concrete made by embedding fibre optics in the aggregate mix. (LiTraCon Inc.)

In a truly MESHed CIty building materials are lighter, cheaper to make, and capable of producing an infinite array of forms and effects only the most creative designers will be able to fully exploit. What is driving this building technology revolution? Breakthroughs in nanotechnology allow these new materials to improve how our cities look, perform, and are maintained. Oh, and cities will be smarter too: a lot smarter.

In broad terms the building material revolution functions across two key categories: one is rigid materials like most steels, other metal alloys, cements, and transparent media like glass; the second category is in flexible materials like textiles, screens, and fibres like biosteel (which is as the name implies a super-strong material made by a living source). In the work of the next generation of designers we’ll see market-disrupting changes in the building industry these materials bring; however, hand-in-hand with changes in material technology will be the need for corresponding changes to the way the building industry finances its more creative projects.

We will explore the more traditional building materials first. 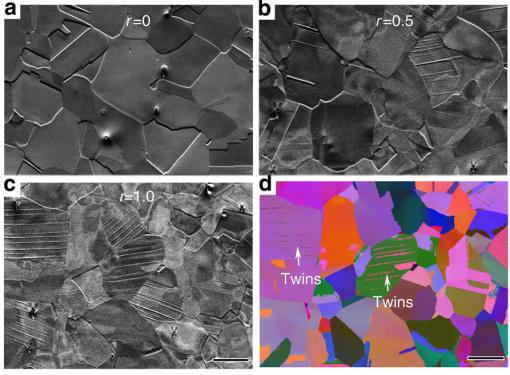 Where did these new, nano-based materials come from? The surprising truth is that some come from improving old ideas that, unkown until now, relied on nano-sized particles for their strength. For example, Brown University researchers are experimenting with a new twist, as it were, on how to strengthen steel. A simple technique called twinning-induced plasticity, or TWIP, raises the bar on the limits of  “strength-ductility tradeoff.”  In other words, the technique of twisting hot steel creates a stronger metal that is less likely to fracture under a variety of loads.

In work done at the university by Huajian Gao and his partners, the old process of strengthening steel by folding it over and over again—think of Japanese Samurai sword technology called “work hardening”—is adopted to achieve better strength. Gao explains:

“Essentially we partitioned the material into a hardened part near the surface and a softer part near the core,” Gao said. “This allowed us to double the strength without sacrificing ductility.” 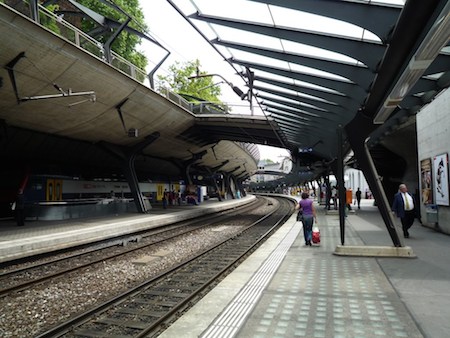 As new, better materials flood the market, however, the construction industry will have to change its project financing to fully benefit from them. In fact, that change is happening propelled by the the fusion between design thinking and the power of industrial scale manufacturing.

If you remember building innovation in the nineteen-nineties you will recall that Santiago Calatrava revolutionized the way architects designed in concrete. Working with industry partners who had developed stronger, and less water permiable, ductile aggregates, Calatrava had the design and engineering skills needed to imagine new forms based on the medium’s enhanced performance characteristics. Very quickly other industry players had to incorporate the more plastic, stronger material or be left behind in a design-aware world. Calatrava’s work illustrates how a new building material spurred sector innovation.

Today concrete is not only more plastic in its ability to adopt complex shapes, it is stronger and lighter too. Concrete panels can even be made translucent as researchers and architects in Budapest discovered in 2001. Their LiTraCon material (light transmitting concrete) while not nano tech based creates new possibilities for space making in architecture.

But it is nano-tech scale innovation that is creating the concrete architects will use to build the energy efficient, livable cities of tomorrow. By embedding carbon nanotubes in concrete it becomes much stronger and lighter. It can also be made to conduct electricity creating new design opportunities for an old building technology. Imagine Internet of Things capable concrete panels as part of a large modular design project. The potential for new design solutions from smart building materials is limitless. 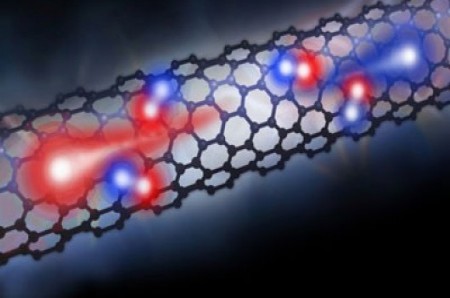 Nanocarbon tubes layered onto a glass substrate will generate power while transmitting light.

Nanotechnology is revolutionizing the glass industry as well. Today there are numerous nano-particle based applications that when coated on glass give it a range of enhancements. Self-cleaning glass is an industry-wide application. One promising new technology allows glass to generate electricity from light the same way silicon-based photovoltaics do now. It lets glass transmit light into a building while also providing a source for cheap, green energy. The glass can effectively become an information highway and, in time, we are sure that glass panels will become image mediums as well as power sources in cities. For a very technical but informative description of the latest research on the topic, see this paper.

Here is a graph that shows the relative cost of materials compared to their strength measured by their modulus of elasticity. Concrete is at the left, as expected, engineered ceramics are at the right as they are both very strong and very expensive (ceramics are used for jet turbine blades after all). 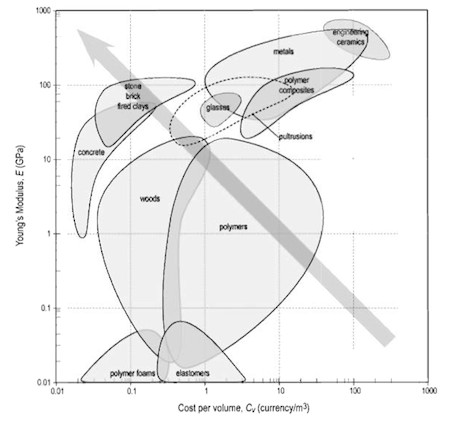 Even while the research industry is creating stronger, lighter, and more agile materials for builders, their future application in MESHed Cities may take a while to become ubiquitous.

In today’s moribund economy the construction industry is slow to embrace change unless it is profitable. That is because the industry’s innovation efforts tend to be funded by a project-by-project return on investment.

For the majority of builders, it is easier and more financially rewarding in the short term to make money on a project by innovating faster ways to use old tech than it is for them to benfit from new materials requiring longer term, multi-project investments. That will change as the new materials become more available and material suppliers incorporate new ways to finance builders. Until that happens we will see innovative construction systems exploiting existing steel technology created through advanced CADCAM design like that being used at Vectorbloc.

Calatrava proved, however, that when designers can team up with material suppliers to create breathtaking new structures, the construction industry has no choice but to embrace the innovation. Perhaps governments will begin offering the same kind of R&D economic stimulus to the building sector—as it embraces more and more advanced technologies—as they do to the digital sector. However new funding for building innovation evolves, change is coming. The only questions we have to ask is how fast and will Western economies continue to lag behind Asia Pacific?

MESH Cities waits for the cities of tomorrow, today.