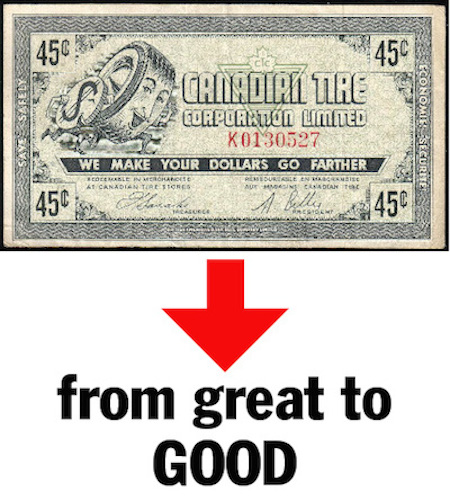 What’s so great about being GOOD?

Ever since Julian Assange advised Google CEO Eric Schmidt that Bitcoins were going to be the next big thing, alternate currencies have made headlines.

This shouldn’t be a surprise to North American consumers. There is a long history here of businesses using alternative, branded money to attract customers. The Canadian Tire Company is one example. More than one billion of their notes have been printed since 1958. Most Canadians have at least a few CT dollars tucked away. The currency is so ubiquitous that charities will sometimes ask for donations in Canadian Tire money if home owners are unwilling or unable to offer the coin of the realm. Yes. Printing your own, legal currency is an effective way to add value to existing markets.

This is not only a Canadian phenomenon, in the US too that great financial entrepreneur Warren Buffet successfully invested in coupon companies. If the idea is good enough for Berkshire-Hathaway, well . . . These alternate forms of money work. Add the fluidity that the Internet brings to the alternate currency mix and you’ve got an effective way to empower consumers.

That is why when MESH Cities editors read that Canadian do-good company Zerofootprint Software was issuing its own version of money—GOODcoins—we were intrigued. Is it a competitor to Bitcoins? Yes, and no. Zerofootprint wants to use the power of alternative currencies to do, well, good. Here is what company founder Ron Dembo has to say about Zerofootprint’s initiative:

In other words, Zerofootprint thinks if a consumer does something to reduce their greenhouse gas emissions, or save water, then there ought to be a reward for that behaviour. And why not? The commercial marketplace proved the motivational value of alternative currencies. Not only do consumers get something, so do retailers. So-called loyalty programs allow companies access to reams of customer information that otherwise would be off limits. Call it the free market equivalent of a symbiotic relationship. Take a look at how Toronto’s Waterfront is using GOODcoins to make the city a better place to live.

This is such a persuasive tool that MESH Cities thinks tomorrow’s smart cities will come with offerings like GOODcoins baked into the urban operating system. For example, people often resist paying taxes for intangible, future benefits like livable environments or better educated citizenry. If there was a way to make those future benefits tangible immediately there may be less resistance to mitigating global warming.

In a Mobile, Efficient, Subtle, Heuristics (MESH) city a tactic like GOODcoins would be a subtle way to foster and leverage small actions for massive gains. The growing Internet of Things’ interconnectedness makes the idea viable. What would leading economists think of the tactic? We will find out. Stay tuned.