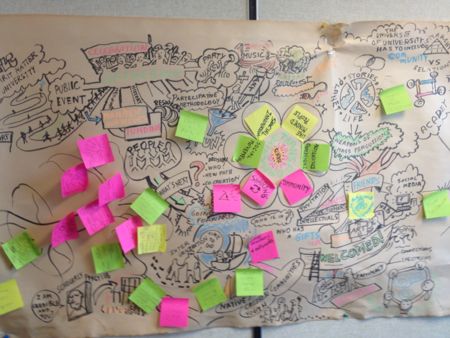 It is obvious. Successful cities do not rise from smart networks or from Internet of Things connectivity alone.  Cities are complex. That’s why MESH Cities thinking offers more than technological fixes to the challenges facing the world’s metropolitan regions. Now consulting firm McKinsey has come to a similar conclusion. More on that later.

MESH Cities’ approach is to use information technology as a tool to better understand the complexity of cities in an era our colleague Bruce Mau calls one of “Massive Change.” The task is not an easy one, especially when few civic leaders have the resources or political support needed to fashion their communities into 21st C success stories.

How do we move the livable cities curve forward? MESH Cities’ mission is to distribute the knowhow needed to make livable, sustainable cities. Admittedly, one branch of that knowledge tree is designed to improve the infrastructure technology that keeps urban agglomerations running smoothly. But that’s not the whole MESH City story—even though many players in the sector favour quick technological fixes over broad-spectrum, strategic ones.

That’s why another part of the MESH Cities knowledge tree catalogues the policies administrators can use to make their cities more competitive in an interconnected world. And remember, as Richard Florida points out, the best and brightest people today are able to move from city to city with few impediments. In fact, many professionals today live in one city but also work in one, two, or three others. If they don’t like one place, it is simple to move their services—along with their homes and taxes—somewhere else.

The characteristics of what makes a city appealing to these modern nomads are immediately obvious: clean air, water, efficient transit, sustainable energy, good urban infrastructure, good institutions, and enjoyable, livable neighbourhoods. In other words, successful cities are made in large part through a continuous history of good governance, not to mention a certain kind of long-term social vision beyond the commercial world’s quarterly report horizon. In that way smart cities have been with us for millennia.

Done deal successful cities are easy to write about, but it is incredibly difficult to transform a marginal city into a great one. Just try it. Without a game plan or maps needed to traverse the new territory, how are mayors, bureaucrats, or engaged citizens expected to plan constructively for massive change? Here is a framework for action. 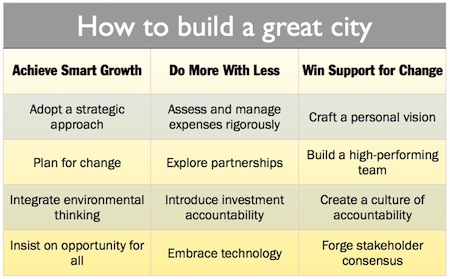 The venerable consulting firm McKinsey & Co. sees the opportunity to help. Their study titled, “How to Make a City Great,” catalogues steps civic leaders can take to “transform their cities into great places to live and work.”

McKinsey’s exploration of big vision urban policies breaks new ground for the corporate consulting giant. They even managed to be a little apologetic for taking such a long time to get that cities are the next big economic thing; but, in the foreword, the report’s editors remind us that McKinsey’s Global Institute has long explored the economics of urbanization. Now they are embracing the softer, social reality of city building as well.

We applaud McKinsey. They understand that in a hyper-connected world old top down development strategies won’t fly. Even worse, those too prescriptive techniques forego the benefit of the urban innovation crowd sourcing offers.

How does the consulting giant suggest we go about building a great city?

They break the steps down into the three broad categories of achieving smart growth, doing more with less, and finding support for change (take a look at the table above). Of the three, getting support for change is definitely the most demanding. Want to change your city for the better? Be prepared, says the report, to face opposition. After all, change is hard even when the need for it may be obvious. Can you spell “climate change meets urban demographics”?

By interviewing successful city leaders McKinsey assembled a database of urban best practices. For example, they asked what kind of technology underpins “green district” development? Here is what sector leading cities do to build out their green communities: 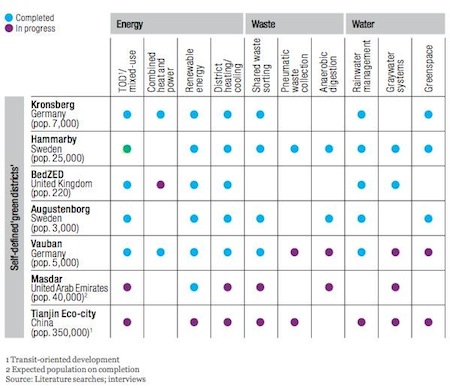 Look at Hammarby, Sweden, one of our favourite communities. At a population of 25,000 it slices a big chunk off Stockholm’s old portlands. According to the chart they’ve led the field in adopting sustainable infrastructure. Talk about transformation. Don’t take McKinsey’s word (or ours for that matter) for it. Go there. Find out why it works. Return home. Build.

The world’s next great city may be waiting for you.