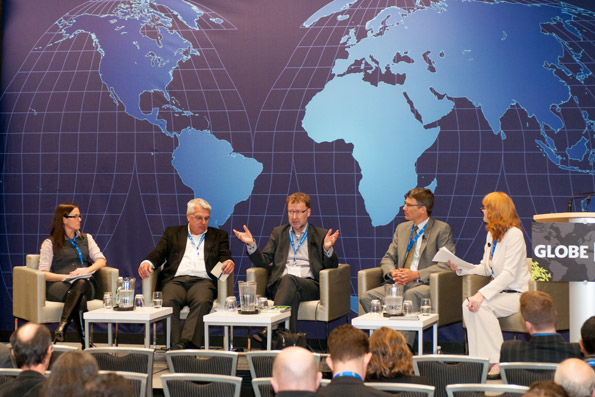 What does the future hold for us in an energy-constrained economy?

Do you search for reliable, thoughtful people whose insights will help navigate the massive changes the world is undergoing? Are your efforts mostly futile? We understand your frustration. In a media environment long since overloaded with unfiltered information, it is becoming harder to sift through the crap that passes for reasoned, impartial analysis these days.

The Globe Conference is a place one can expect to find people whose ideas will change things. And, ultimately, we weren’t disappointed with Globe2012–although the most memorable insights, at least from the perspective of MESH CIties, came from a speaker not listed in the conference program.

Don’t get us wrong. There were dozens of important discussions at the conference generated by exceptional people. But one stood taller than the rest. Maybe it was because this voice has earned its authority. With world-class success in science, academia, and business topped off with an Order of Canada, Dr. John McDonald commands attention when he speaks.

McDonald was the keynote at an informal gathering last Wednesday evening. Sponsored by law firm Gowlings, the event attracted a few hundred of the conference’s attendees. It was a typical meet and greet occasion. Lots of people talking, eating, and drinking. Typical with events like this one, the crowd showed polite but distracted attention to the speakers. There was the inevitable “shushing” when people got loud.

Then Dr. McDonald took the stage.

We’ve never met the man before. It is hard to judge his physical age, especially since his reasoned ideas offer the clarity and persuasiveness of a person in their prime. When McDonald started to speak the background noise stopped. Everyone in the room knew this was a voice that had to be heard.

What he said was sobering.

For fifty years or so people in the Western world have lived lives of unparalleled abundance driven by cheap, available energy. That era is coming to an end. Peak oil has arrived. Oil sources are more and more difficult to find. The ones that are found damage the environment in ways that cannot be remediated. Canada’s tar sands is just one example.

The world’s population is growing rapidly. More importantly as far as energy is concerned, people in China, India, South Asia, and beyond want to live lives like ours. And they are doing just that in greater and greater numbers.

Demand for oil combined with dwindling supply causes price volatility. Canada’s policy to become an oil super power means its dollar is based on an increasingly scarce commodity rather than on value added products and services. What is the result of this policy? The dollar’s value goes up based on oil exports. Value-added sectors find it harder and harder to compete in a global economy because their products cost buyers more. The North American middle class is threatened.

Add anthropogenic global warming to the mix and we in the West are faced with massive societal changes.

Contrast McDonald’s address to the next day’s conference keynote from Minister of the Environment, Peter Kent. We have no doubt Mr. Kent is an intelligent, well-meaning person. He once was an advocate for the environment in a way that his political party now calls “leftist”. For whatever reason, he no longer holds those views–at least not publicly. He talked about how mining and boiling large swaths of Alberta soil can be managed environmentally. Piping that oil across pristine mountains and valleys to B.C.’s Orca-filled coast is also environmentally sound. And remember, Canada’s oil is ethical oil.

These two men were the conference’s ideological bookends. On the one hand we have Dr. McDonald, an MIT educated PhD who launched Canada’s space industry; a noted scientist; a very successful entrepreneur; an environmentalist. On the other we have a trusted voice with years of experience gathering and reporting the news. Now Mr. Kent is entrusted with the power and authority inherent in his position as Minister of the Environment. His responsibility is to ensure all Canadians can live, work, and play in a safe environment now and in the future.

Why there is such an ideological gulf between them? Unlike many in the environmental movement, we are convinced there is some rational behind the policy decisions of the current Canadian government. Is it the threat of global disruptions in the energy supply chain that could threaten Canada and its people? Maybe. That does not make those decisions the right ones for the majority.

Whatever the reasons for the current government’s policy decisions, we have to manage our resources based on real data, not wishful or frightened thinking.  More than that, we have to create the world we want to live in rather than chase zero-sum games driving us down to the lowest common social denominator.

We’ll leave the choice of whose ideas to follow up to our readers. MESH Cities knows whose analysis will inform our long-term actions.